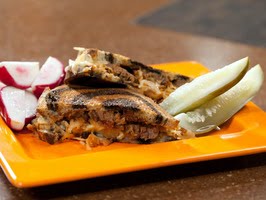 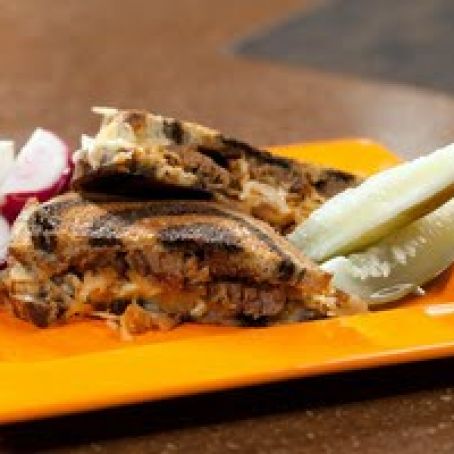 For the Russian-style dressing: In bowl, mix dressing of sour cream, relish, ketchup, chives, salt, and pepper.
Cook’s Note: Store in a container and chill for a tangy Russian dressing for Reubens later in the week.

Cook’s Note: The night you want to make sandwiches, reheat the brisket in the homemade barbecue sauce in a covered skillet, add a splash of stock or water to get things going if the sauce is too tight, then uncover and keep warm over low heat.

Warm the sauerkraut in a small pan.

Heat a sandwich press or a large griddle pan over medium heat.

Press the sammies on a sandwich press until the cheese melts or griddle the sandwiches until deeply golden on each side. Serve the sandwiches with halved deli pickles and salted radishes.
Print this recipe