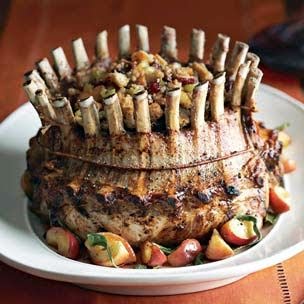 Crown Roast of Pork with Apple, Cranberry and Pecan Stuffing

Make a statement at your holiday dinner with this crown roast of pork filled with a delicious stuffing including apples, cranberries and pecans. 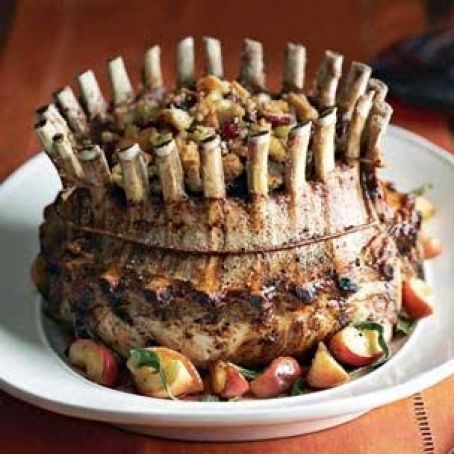 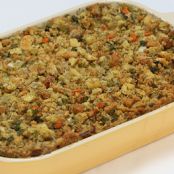 Generously season the roast on all sides with salt and pepper. Let stand at room temperature for 1 hour.

Meanwhile, in a fry pan over medium-high heat, warm the olive oil. Add the onion, celery and apples and sauté until tender and caramelized, 14 to 16 minutes. Transfer the mixture to a large bowl, add the croutons, cranberries and pecans and stir to evenly distribute the ingredients. Add the stock 1 cup at a time, stirring to evenly moisten the croutons. Season the stuffing with salt and pepper.

Position a rack in the lower third of an oven and preheat to 400°F.

Meanwhile, spoon the remaining stuffing into a buttered 2-quart baking dish and cover with foil. After the roast has cooked for 1 hour, transfer the baking dish to the oven and bake for 20 minutes. Uncover the dish and continue baking until the stuffing is crisp and golden, 20 to 25 minutes more.

Using 2 large metal spatulas, carefully transfer the roast to a large carving board, cover loosely with foil and let rest for 20 minutes before carving.

7. To serve, scoop the stuffing from the center of the roast onto individual plates and carve the roast between the bones. 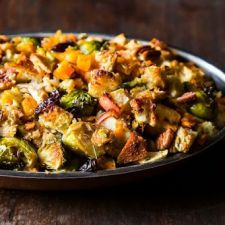