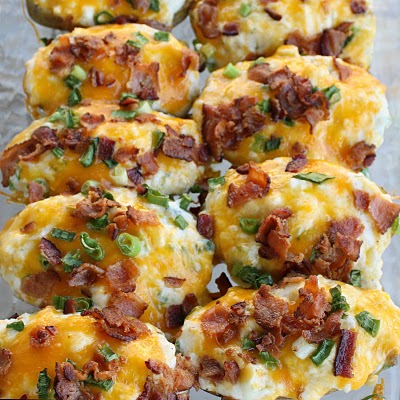 Bake potatoes in preheated oven for 1 hour. You can just microwave the potatoes instead because it is way faster and they taste just as good. About three minutes per potato, just check for tenderness. So if you are cooking 4 potatoes in the microwave you will need to cook them for at least 12 minutes. Make sure to poke holes in the potatoes with a fork before microwaving so that they don't explode.

When potatoes are done allow them to cool for 10 minutes. Slice potatoes in half lengthwise and scoop the flesh into a large bowl leaving about 1/4 inch of flesh so the potato maintains it's shape; save skins.

To the potato flesh add sour cream, butter, salt, pepper, 1/2 cup cheese, 1/2 the green onions, and milk (start adding 1/2 cup of milk but you may not need to add it all depending on the consistency you want. You don't want them too runny).

Mix with a hand mixer until well blended and creamy. Spoon the mixture into the potato skins. Top each with remaining cheese, green onions and bacon. 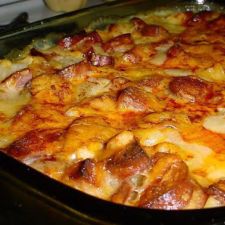