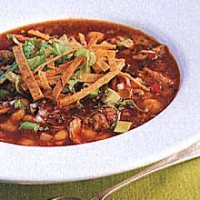 Thinly slice 6 of the garlic cloves and add them to a large soup pot with the water, chicken broth, pork, and oregano.
Bring to a boil, reduce the heat, and simmer uncovered for 1 1/2 hours, skimming the surface to remove froth & fat.
Discard the stem from the chiles and combine Chiles with the boiling water in a small bowl. Soak for 30 minutes, turning occasionally.
Combine the onion, soaked chiles (along with the liquid), the remaining 2 cloves of garlic, and the salt in an electric blender or food processor and process until smooth.
Remove the pork from the broth mixture, reserving the broth. Shred the pork and discard the bones.
Return the pork to the broth mixture and add the hominy and chile sauce.
Simmer an additional 30 minutes.
Season to taste with salt & pepper.

Cut the tortillas in half, and then into thin strips. Heat the oil in a heavy skillet over high heat and fry them in 3 or 4 batches until crisp, 1 to 2 minutes.
Drain on paper towels and transfer to a serving bowl.
Serve the soup with the garnishes in individual bowls for diners to add at the table.

(The garnishes really add to this. We use them all! But I would say the lime adds to it the most.) 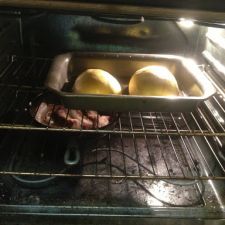