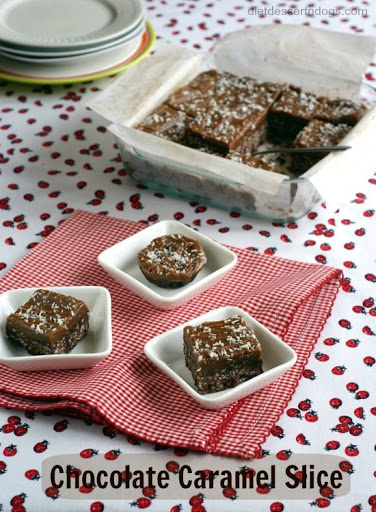 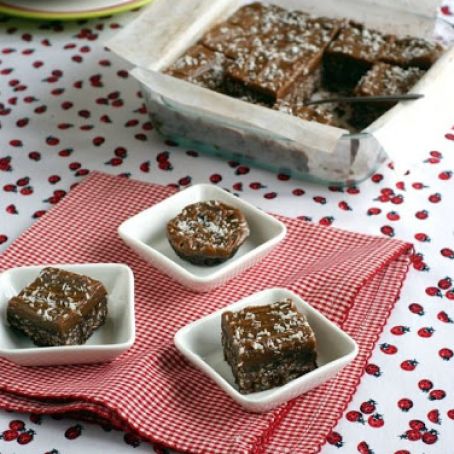 Make the base: Line an 8×8 inch (20 cm) square pan with parchment and set aside. In a large bowl, toss together the cereal and coconut.

In a small, heavy-bottomed pot, combine the coconut oil, coconut sugar, coconut beverage, stevia and salt. Cook and stir over medium-low heat until the mixture begins to bubble around the edges and the sugar is dissolved. Remove from heat and stir in the chocolate. Allow to sit for 30 seconds, then stir again, until all the chocolate is melted. Pour over the cereal mixture and stir until all the cereal and coconut are well coated. Using the back of a spoon, pack the mixture evenly into the pan. Place in the refrigerator while you prepare the caramel.

Make the topping: In a small, heavy bottomed pot, combine the coconut sugar, stevia, vanilla, coconut beverage and salt. Cook over medium-low heat, stirring occasionally, until the mixture begins to bubble around the sides. Continue cooking until the bubbles start to foam up and move across the entire surface of the mixture, then immediately remove from heat and stir in the almond butter. It will appear separated at first, but as you continue to stir, it will combine to form a thick caramel.

Spread the caramel evenly over the chocolate base and sprinkle the top with extra coconut, if desired. Return to the refrigerator until firm, 2-4 hours. Cut into squares. May be served cold or at room temperature. Store, covered, in the refrigerator up to one week.