When he hosts dinners, Mario Batali often makes braised dishes. “I can leave the kitchen and talk to my guests,” says the chef. “And the most remarkable fragrance fills my house.” This recipe calls for four large shanks, but there’s plenty of meat to serve six.

Notes
*If serving 6 people, cut the veal off the bone into large chunks. 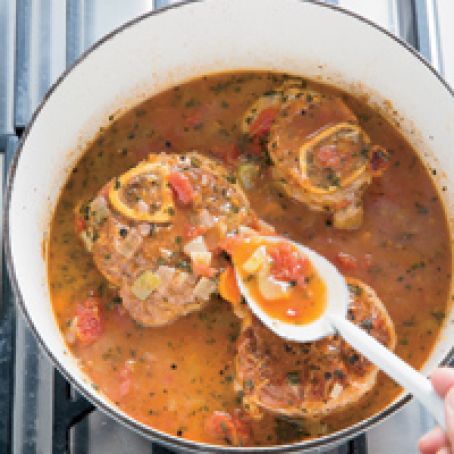 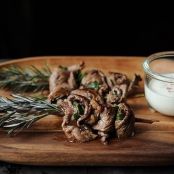 1. Preheat the oven to 375°. Season the veal with salt and pepper. In a large enameled cast-iron casserole, heat the oil until shimmering. Add the veal and cook over moderately high heat, turning, until browned all over, 12 minutes. Transfer the veal to a plate.

2. Spoon off all but 2 tablespoons of the fat from the casserole. Add the onion, carrot, celery and thyme and cook over moderate heat, stirring, until softened. Add the wine and bring to a boil, scraping up any browned bits. Simmer until the wine is reduced by half, 4 minutes. Add the tomato sauce and chicken stock and bring to a boil. Return the shanks to the casserole, cover and braise in the oven for 2 hours and 15 minutes, until the meat is very tender. Let stand covered for 10 minutes.

3. Meanwhile, in a small bowl, toss the parsley with the horseradish and lemon zest and season the gremolata with salt and pepper.

4. Transfer the veal shanks to a platter (see Note). Season the osso buco sauce with salt and pepper and spoon it over the veal. Sprinkle some gremolata over the osso buco and serve with the Saffron Orzo, passing additional gremolata at the table.

Make Ahead
The osso buco can be refrigerated for up to 2 days. 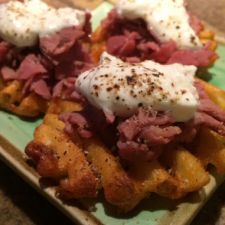