Duck Breasts brined in salt and pears then rendered to a crisp before being infused with smoky tea. If Casablanca could ever be a dish, this would be it. I mean, how tragically romantic does that sound? And then sliced on the bias (more, more baby, please!) served with cranberries, pea shoots and sweet potatoes from the land of geisha-cool itself- Okinawa? I am so there

Brining 102, let’s call it, since brining 101 was more than likely covered in your house last week what with all that turkey. I bet you didn’t add fruit to your turkey brine though, did you? But guess what- you could have and it would have been delicious, though for turkey I would probably have suggested citrus. You probably added lemon, but you could’ve done just as well with super-seasonal satsumas- oh so good with tender turkey. But duck, duck is another matter. In fact, you rarely hear about brining duck, which is a shame. Sure, for confit one prepares a “dry brine” of sorts, but in general, gamy, earthy duck is an oft-overlooked bird in the realm of brine.

I add whole pears, cardamom, juniper and clove to the brine because those are all things I associate with both smoke and holidays. This time of year that’s kind of a prerequisite to cooking, and I used Grant Achatz’ flavor bouncing technique to determine that they would combine well.

After the breasts are seared down to a point, smoke is a wonderfully-decadent element to introduce. Rather than smoke in a wok, which is traditional when making tea-smoked duck, I simply added tea to a hot dutch oven and let it begin to smoke.  Then I tucked the breasts-flesh side down- into the pan and replaced the lid. Mere seconds on that side sears them perfectly and infuses them with a deep, rich smoke that is also effervescent. Served with duck fat-roasted Okinawan purple sweet potatoes,  cranberry compote and pea shoots, this is a dish you won’t soon forget. 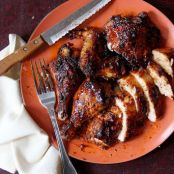 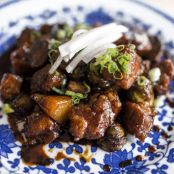 1.Heat the water, salt, pears, cardamom, juniper and cloves in a medium saucepan until the salt has dissolved. Remove from heat, add the ice and stir until cool.
Make a crosshatch pattern on the fat side of the duck breasts with a very sharp knife to allow for permeation. Place the cold brine and duck breasts in a ziplock or shallow dish and allow to brine overnight. Remove from brine and pat dry.

2.Place a dutch oven with lid over medium high heat. Once heated, place the duck breasts, fat side down, in the pan. Fat will render quickly and fill the bottom of the dutch oven.

As it collects, periodically pour it off. This process takes 5-10 minutes depending on the thickness of the layer of fat. You will know most of the fat has finished rendering when a crust begins to develop and it takes on a lightly-charred look. 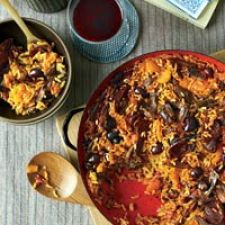 Rice with Duck and Apricot