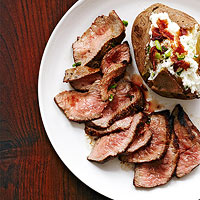 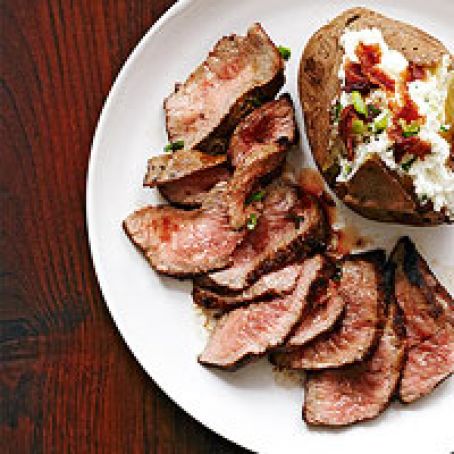 Preheat the oven to 425 degrees . In a large heavy skillet (preferably cast- iron), crisp the bacon over medium heat for 8 minutes. Transfer to a paper towellined plate; crumble once cooled.
2. Bake the potatoes until skins are crisp, about 1 hour. Let sit until cool enough to handle.
3. Preheat the broiler. Cut a deep X into the top of each warm potato; squeeze the sides to push the flesh out. Scrape the flesh into a bowl, leaving a thin layer attached to the skin. Mash the potatoes, then mix in the goat cheese, milk and two-thirds of the scallions; season. Spoon the mixture into the skins; transfer to a baking dish.
4. Wipe the skillet used for the bacon clean and heat it over medium-high heat; swirl in the oil. Season the steaks; sear, flipping halfway through, 6 minutes for medium- rare. Let rest 5 minutes.
5. Meanwhile, brown the potatoes under the broiler for 1 to 2 minutes. Garnish with the remaining scallions and the bacon. Serve with the steaks. 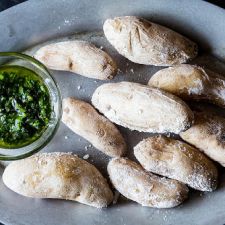