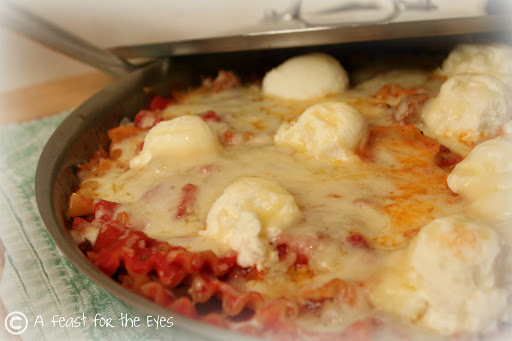 This recipe is adapted from America's Test Kitchen. I've made several skillet or crockpot lasagna recipes, over the years. Usually, you need bottled spaghetti sauce. Could America's Test Kitchen develop a quick version of lasagna, that doesn't use bottle spaghetti sauce? Yes, they did-- except I tweaked the recipe a bit, in order to season it a bit more and, of course, I wanted plenty of melted cheese. Best of all, this was on the table in 45 minutes, from start to finish. My family loved this. I have noted my adaptions in the recipe 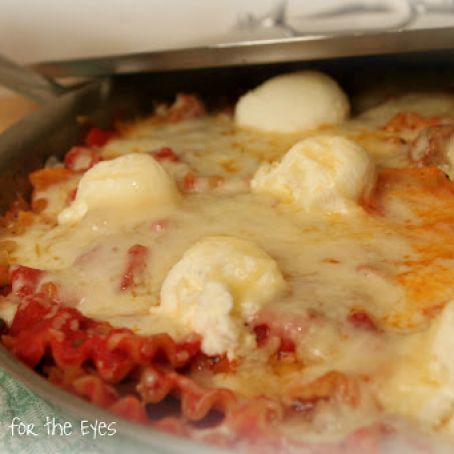 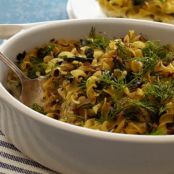 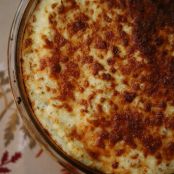 If using the Italian sausage (instead of ground pork) remove the casing and break into pieces.
Heat a small amount of olive oil in large skillet (with a lid) over medium heat until shimmering. Add ground meat and cook, breaking apart meat, until no longer pink, about 4 minutes. Push the meat off to one side of the skillet, and add about 1/2 teaspoon of oil

Add onion and 1/2 teaspoon salt and cook until onion begins to brown, about 5 minutes. Stir in garlic, Italian seasoning and pepper flakes and cook until fragrant, about 30 seconds, then combine the cooked onion with the meat mixture.


Scatter pasta over meat but do not stir. Pour diced tomatoes with juices and tomato sauce over pasta. NOTE: I found that the lasagna noodles were quite covered with liquid, so I added about 1/4 cup more water. Gentle move the noodle around, until they are covered with liquid. Cover and bring to simmer. Reduce heat to medium-low and simmer, stirring occasionally, until pasta is tender, about 20 minutes. NOTE: I found that the noodles weren't quite cooked, so I gave them an extra 10 minutes. They were cooked to al dente. Still, there was too much liquid in the skillet, so I covered it and carefully drained the excess liquid in the sink.

Remove skillet from heat and stir in 1/2 cup Parmesan. Season with salt and pepper. Dot with heaping tablespoons ricotta, cover, and let stand off heat for 5 minutes. Turn on the broiler.

Add the grated, soft cheese, and broil for about 3 minutes.
Sprinkle with basil and remaining 2 tablespoons Parmesan. Serve.

TASTING NOTES: I think that the Italian seasoning and melted cheese upped the ante for flavor with this recipe. This reheats well, and serves 6-8 hungry people in 45 minutes! 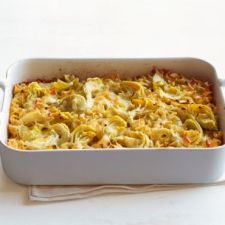