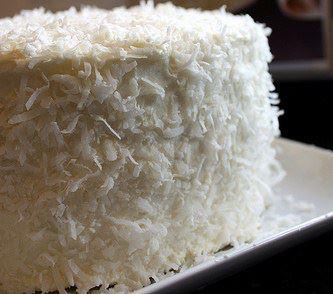 I like to make this cake for my husband for his birthday every year! He is the resident coconut lover in the family, and this cake does not disappoint! 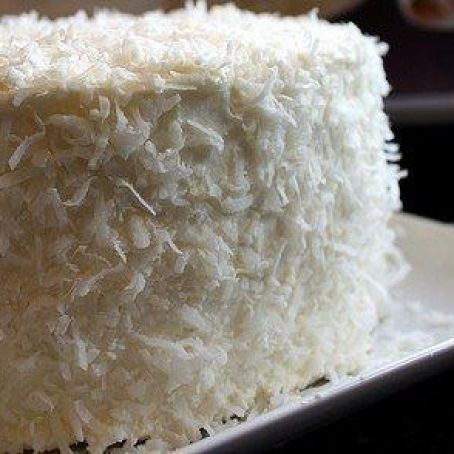 Put the egg whites in a bowl and whisk slightly. Add 1/2 cup milk and coconut flavoring. Mix thoroughly. Set aside.

In the mixing bowl of an electric mixer, combine the flour, sugar, baking powder, and salt. Add the butter and coconut milk and combine on low speed. Increase speed to medium and beat until light and fluffy, about 2 minutes.

Add the egg white mixture in 3 additions, scraping down the sides of the bowl and mixing just long enough to incorporate between additions.

Divide the batter among the prepared pans and bake for 35-40 minutes or until a toothpick inserted into the center comes out clean.

Allow the cakes to cool in their pans for 10 minutes, then turn them out onto cooling racks to cool completely.
FROSTING:
Put the cream cheese in the bowl of an electric mixer and beat on medium speed until fluffy and smooth.

Add the butter 1-2 tablespoons at a time, mixing until smooth. Add the powdered sugar and vanilla and mix until creamy. Set aside.

Combine the granulated sugar and water in a small heavy saucepan and bring to a boil over medium heat, stirring to dissolve the sugar. Continue to cook, without stirring, until the syrup reaches the soft-ball stage, 238 degrees F on a candy thermometer.

Meanwhile, have the egg white in the bowl of an electric mixer, ready for when the syrup is at the proper temperature. Slowly add the hot syrup to the egg whites, while mixing on medium-low.

When all of the syrup is incorporated, raise the speed to medium-high and beat until the mixture has cooled to body-temperature and it forms stiff peaks.

With the mixer on medium-low, add the cream cheese and butter mixture one spoonful at a time. When all is incorporated, raise the speed to medium and whip until the frosting is smooth and fluffy.

Frost the cooled cakes and cover with shredded coconut. 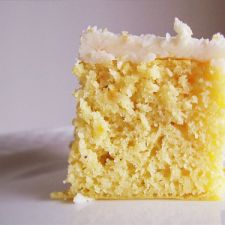