If you bring this dish to a party, make sure you bring the recipe with you, because everyone will want it after eating these." 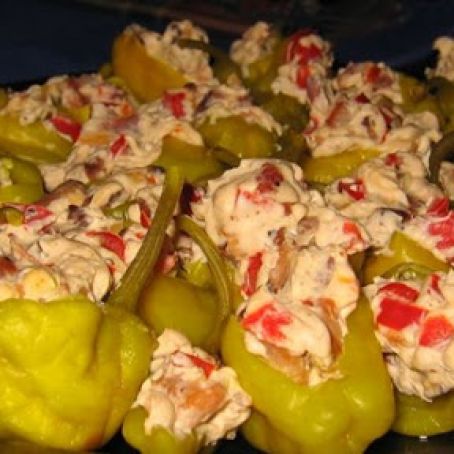 In drippings, cook shallots and red pepper over medium heat until vegetables are tender. Cook about 5 minutes. Remove skillet from heat and let cool for 20 minutes.
In a small bowl, beat cream cheese and milk with an electric mixer at medium speed until smooth. Stir bacon and shallot into the mixture.Add sour cream is mixture thick (as needed)

Spoon cream cheese mixture into a heavy weight plastic bag. Cut a small hole in one corner to squeeze the filling from.

With small knife, cut a slit lengthwise into each pepper (or cut off top and fill from top). Do not cut the whole way through the pepper.

By squeezing the bag, pipe cream cheese mixture into peppers.

Cover and refrigerate for at least 1 hour, up to one day.