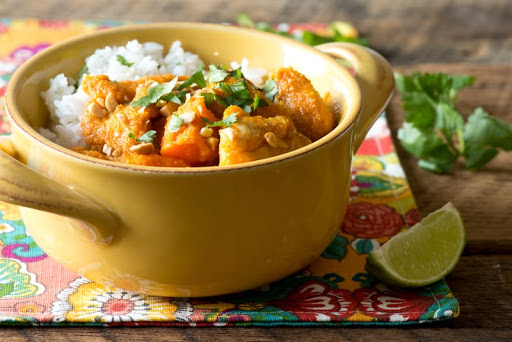 Healthy Coconut Chicken & Sweet Potato Stew satisfies after a long and busy day. The creaminess comes from coconut milk. With a ginger and jalapeño kick. 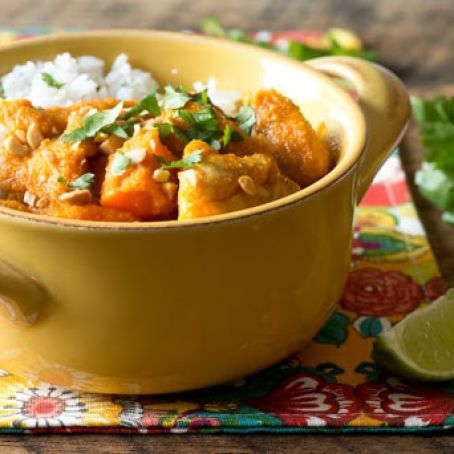 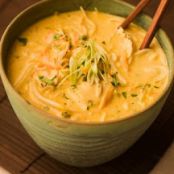 Pulse the ginger, garlic, jalapeños, juice, paprika, cumin, coriander, turmeric, and water in a food processor fitted with the blade attachment until it forms a paste; set aside in the food processor.

Heat 2 tablespoons of the oil in a large saucepan over high heat until shimmering. Add the onions and a pinch of salt and stir to combine. Reduce the heat to medium and cook, stirring often, until softened, about 8 minutes.

Stir in the ginger paste (reserve the food processor; no need to wash) and cook, stirring, until the paste begins to brown, about 3 minutes.

Stir in the tomatoes, peanuts, coconut milk, and coconut and cook, stirring often, until the mixture thickens slightly, about 5 minutes. Transfer back into the food processor and purée until smooth. Return the mixture to the saucepan. (Alternatively, purée it directly in the saucepan with an immersion blender.)

Add the broth and measured salt and pepper. Bring to a simmer and cook for 15 minutes. Stir in the sweet potatoes and cook until tender, about 20 minutes. Keep warm over low heat.

Heat the remaining 1 tablespoon of oil in a large skillet over medium-high heat until shimmering. Season the chicken with salt and pepper. Working in batches to avoid crowding the skillet, brown and cook until the chicken is cooked through and the juices run clear when pierced with a knife, about 8 minutes. Add the chicken to the stew and stir to combine. Taste and season with salt and pepper as needed.

Serve garnished with additional shredded coconut, orange or lime wedges, peanuts, and cilantro, if desired. This can also be served over rice.

Leftovers can be stored in an airtight container in the refrigerator for up to 4 days.

For Paleo, swap coconut or olive oil for the peanut oil and omit the peanuts. 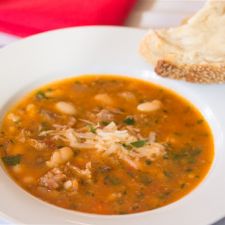