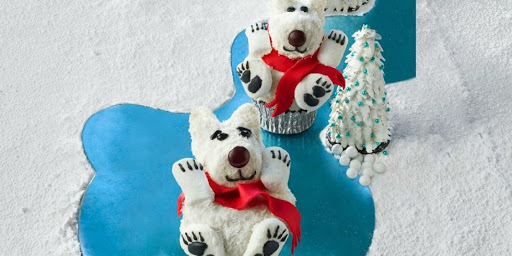 These cuties are as fun to make as a gingerbread house, but much tastier. 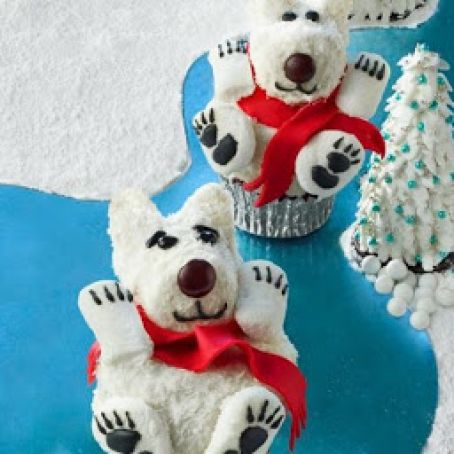 Make the Buttercream: Sift confectioners' sugar into a bowl. Using an electric mixer, beat butter on medium speed until creamy, about 2 minutes. Reduce mixer to low and alternately add the sugar and heavy cream. Mix in vanilla extract. Increase speed to high and beat until fluffy, 2 minutes.

Make the Royal Black Icing: Using an electric mixer (with the whisk attachment), whisk egg whites and cream of tartar in a large bowl on medium-high speed until foamy, 1 minute. Reduce speed to low and gradually add confectioners' sugar, beating until just incorporated. Increase speed to high and beat until medium-stiff glossy peaks form, 6 minutes. Tint 1/2 cup icing with black gel food color (for the bears); transfer to a piping bag fitted with a small round tip.

Spread a small amount of buttercream on top of each Red Velvet Cupcake and top with an upside-down donut. Stick a toothpick into each donut hole and attach to the back of the chocolate donut.

Cover the entire cupcake (marshmallow, gumdrops and all) in buttercream, then coat in the coconut.

For the hands and feet, cut slices off the outsides of the remaining marshmallows. Use black black royal icing to pipe on paw pads and claws. Let set, then attach to bears using buttercream.

Lightly dust a work surface with cornstarch and roll out the red fondant. Cut 6- by 1/2-in strips of fondant for scarves and use a sharp knife to fray the ends. Wrap around the bears' necks. Use buttercream to attach an M&M to the front of each nose, then pipe a mouth, eyes and eyebrows with black royal icing. 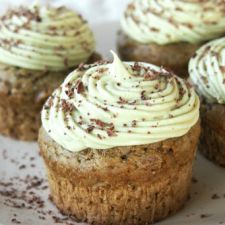