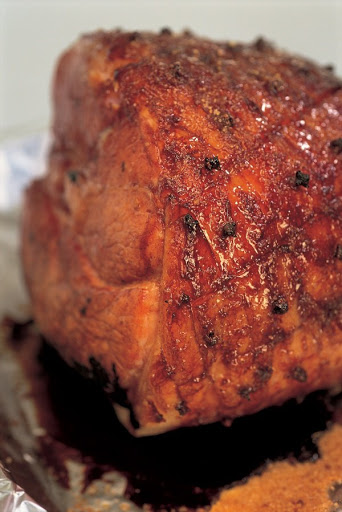 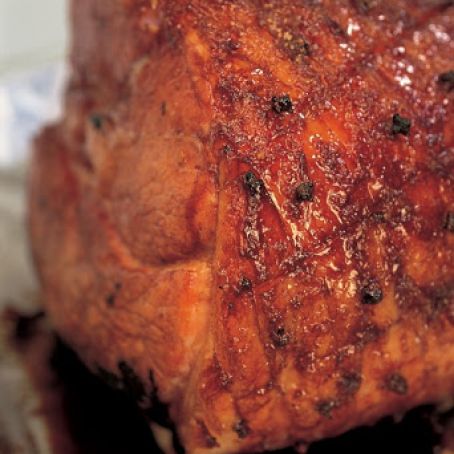 I find now that mild-cure gammon doesn't need soaking, but if you know that you're dealing with a salty piece, then put it in a pan covered with cold water, bring to the boil, then tip into a colander in the sink and start from here; otherwise, put the gammon in a pan, skin-side down if it fits like that, add the onion, then pour over the Coke.

Bring to the boil, reduce to a good simmer, put the lid on, though not tightly, and cook for just under 2½ hours.
If your joint is larger or smaller, work out timing by reckoning on an hour per kilo, remembering that it's going to get a quick blast in the oven later.
But do take into account that if the gammon's been in the fridge right up to the moment you cook it, you will have to give it a good 15 minutes or so extra so that the interior is properly cooked.
Meanwhile, preheat the oven to 240°C/gas mark 9/450ºF.
When the ham's had its time (and ham it is, now it's cooked, though it's true Americans call it ham from its uncooked state) take it out of the pan and let cool a little for ease of handling. (Indeed, you can let it cool completely then finish off the cooking at some later stage if you want.)
Then remove the skin, leaving a thin layer of fat.
Score the fat with a sharp knife to make fairly large diamond shapes, and stud each diamond with a clove.
Then carefully spread the treacle over the bark-budded skin, taking care not to dislodge the cloves.
Gently pat the mustard and sugar onto the sticky fat.
Cook in a foil-lined roasting tin for approximately 10 minutes or until the glaze is burnished and bubbly.
Should you want to do the braising stage in advance and then let the ham cool, clove and glaze it and give it 30-40 minutes, from room temperature, at 180°C/gas mark 4/350ºF, turning up the heat towards the end if you think it needs it.