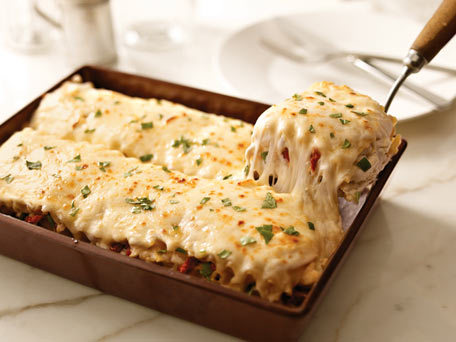 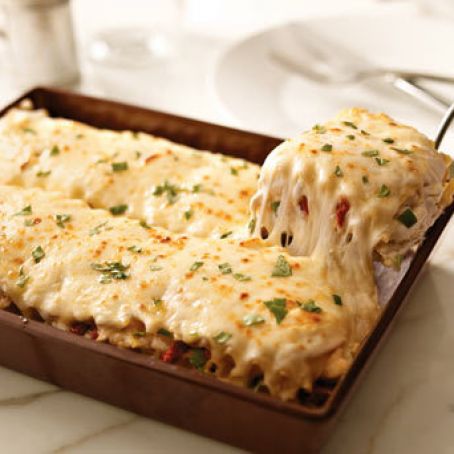 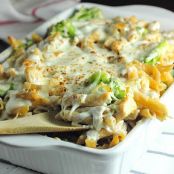 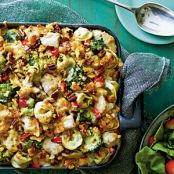 In a large skillet heat the olive oil over medium-low heat. Add the onion, garlic, chicken, Italian seasoning and season well with salt and pepper.
Cook, stirring often until chicken is cooked through. Cut the artichokes in half and then in half again, dry off any moisture with paper towels. Stir them into the chicken and cook 2 - 3 minutes. Remove from heat and allow to cool.
In a large mixing bowl combine the ricotta, 1 + 1/2 cups of the mozzarella, the egg and parsley.
Make stacks out of the spinach leaves and cut them into thin strips (chiffonade). Mix them into the ricotta mixture - it will be thick.
Make the sauce:
In a large, heavy duty saucepan melt the butter over medium-low heat. Whisk in flour and cook 3 - 4 minutes, whisking often. Slowly whisk in milk, turn heat up and bring to a simmer.
Maintain a simmer for 4 minutes, stirring often. Turn heat down to low and stir in nutmeg, Parmesan cheese and a pinch or two each of salt and pepper, continue stirring until cheese is melted. Remove from heat.
If using dried noodles cook according to package directions.
Assemble the lasagna:
Preheat oven to 375 degrees F. Butter a 9 x 13-inch casserole pan.
Add a very thin layer of sauce over bottom of the pan, then a layer of noodles covering the bottom completely from edge to edge. Spread 1/2 the ricotta mixture evenly from edge to edge then top with 1/3 of the chicken mixture followed by 1/3 of the sauce.
Cover the filling with another layer of noodles followed with the remaining 1/2 of ricotta, 1/3 of the chicken and 1/3 of the sauce.
Cover with another layer of noodles followed by the remaining sauce, the remaining chicken mixture and the 1/2 cup mozzarella cheese.
Bake 45 - 50 minutes until bubbly and hot in the middle. If the top starts to get too brown tent with aluminum foil. Allow to set 5 - 10 minutes before cutting into squares and serving. 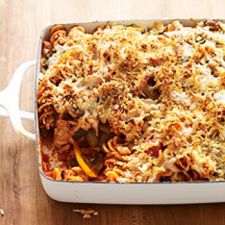