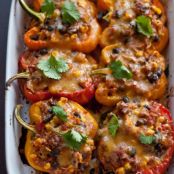 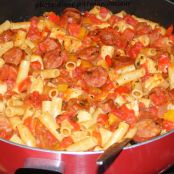 Preheat oven to 375 degrees F. Cut the peppers in half lengthwise, slicing from the stem to the bottoms, leaving the stems intact. Remove the white pithy ribs near stem and down length of inside. Remove the ribs and seeds and discard. Place the peppers in a shallow 13 x 9 baking dish. Drizzle the peppers with 1 tablespoon of the oil. Cover the dish with foil and bake the peppers 5 to 20 minutes, until the start to soften.


Meanwhile, heat the remaining 1 tablespoon of the oil in a large skillet over medium-high heat. Add the onion, garlic, salt, black pepper, chili powder and cumin; cook until the vegetables are softened, about 3 minutes. Add the sausage to the skillet. Cook, breaking it up with a slotted spoon until lightly browned, about 5 minutes. Add the salsa and the spinach and cook, stirring occasionally, about 5 minutes. Remove the skillet from the heat and stir in the cooked brown rice.

Carefully fill the pepper halves with the turkey mixture. Cover the dish with foil and bake until the filling is hot and the peppers are tender, 20 to 25 minutes. Remove foil and sprinkle the cheese over the top of the peppers. Return to oven; bake uncovered until cheese has melted, about 7 to 10 minutes. Top the peppers with a heaping tablespoon of the yogurt. Place slices of the avocado on top of each pepper. Sprinkle with basil. Serve immediately.