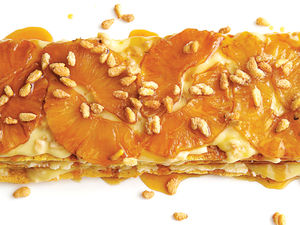 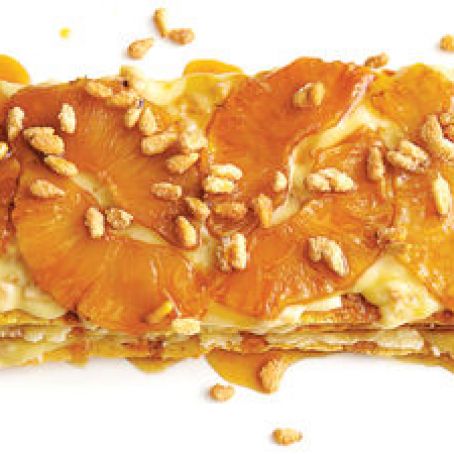 Melt butter in a 10" skillet over medium; cook until color is a deep golden brown, 6–8 minutes, and let cool. Pulse pine nuts and cake flour in a food processor until finely ground.

Using an electric hand mixer, beat sugar and egg yolks in a bowl until pale yellow and thick, about 4 minutes.

Make the buttercream:
Using an electric hand mixer, beat butter and Zirbenz until smooth and creamy; set aside. Heat sugar and ¼ cup water in a 1-qt. saucepan over medium-high until an instant-read thermometer reads 245°, about 5 minutes.

Meanwhile, in the bowl of a stand mixer fitted with a whisk attachment, beat egg whites until frothy. With the motor running on medium, slowly drizzle sugar syrup into egg whites along the side of the bowl, avoiding the whisk. Increase speed to high; beat until stiff peaks form and meringue is cool to the touch, about 5 minutes. Add reserved butter and beat on medium until smooth, about 2–3 minutes; chill until ready to use.

Make the white chocolate ganache:
Place chocolate in a bowl. Boil cream in a 1-quart saucepan and pour over chocolate; let sit, without stirring, for 2 minutes. Add pineapple and salt and, using a rubber spatula, stir to combine; cover and set aside until ready to use.

Make the caramelized pineapple and syrup:
Melt honey in a 12" skillet over medium-high until bubbly, about 3–4 minutes. Add pineapple in a single layer; cook, flipping once, until caramelized, about 15 minutes. Using a slotted spoon, transfer pineapple to a plate; set aside. Stir limoncello into honey; set syrup aside.

Assemble the torte:
Invert cake onto a cutting board; slice lengthwise into three 4"-wide strips. Place 1 strip of cake in center of a serving platter. Spread half the buttercream and one third of the ganache over cake. Top with another strip of cake; spread with remaining buttercream and one third of the ganache. Top with remaining ganache. Arrange caramelized pineapple over top of torte and sprinkle with candied pine nuts; chill. Drizzle with syrup before serving.