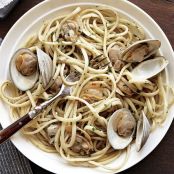 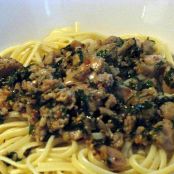 In a large, heavy-bottomed pot, bring about an inch of salted water to a boil. Gently place 4 dozen clams into the pot, cover and let steam until the clams have opened, about 5 minutes. Check frequently, move them around with tongs as needed, and remove the clams to a large bowl as they open so that they do not become overcooked and rubbery. Reserve some of the cooking liquid.

When the clams are cool enough to handle, remove them with a soup spoon or clean fingers, keeping them as whole as possible and collecting as much of the liquor as you can. If large, do a rough chop. Strain the cooking liquid with a mesh sieve into a small bowl.

Bring a large pot of heavily salted water to a boil.

When the water is just about to boil, add the oil in a large saute pan and add the garlic and pepper flakes. Cook over medium-low heat, taking care not to let the garlic get brown, which can happen in an instant. Add the wine and increase the heat so that the wine boils and reduces by half. Add the reserved clam liquor and a good splash of the clam cooking liquid, then the remaining 1 dozen clams. Cover and cook until the clams have steamed open. Remove the clams to the side as they open, and discard any that haven't opened within a reasonable amount of time.

Add the linguine to the boiling water and cook according to the package directions until just al dente.

While the pasta cooks, add the reserved cooked clams to the saute pan and season with salt and pepper to taste. Add butter and toss over the heat until everything is just hot.