1. Make the crust: Place the oreo cookie cookies in a large ziplock bag and crush with a rolling pin. The pieces should be in small crumbs, but still a little chunky, not completely fine crumbs. Set aside ½ cup of the crumbs for the topping, then transfer the remaining crumbs to a 9x13-inch pan and use a fork to mash them up a bit. Pour the melted butter over top and use the fork to combine, making sure that all of the crumbs are moistened. Press into an even layer on the bottom of the pan. Refrigerate while the cream cheese layer is prepared.

2. Make the Cream Cheese Layer: In a mixing bowl, beat the cream cheese on medium speed until light and fluffy, about 3 minutes. Reduce the speed to medium-low and gradually add the powdered sugar until it is all incorporated. Increase the speed to medium and beat for 30 seconds. Using a rubber spatula, gently fold in the Cool Whip. Spread in an even layer over the crust. Refrigerate while the pudding layer is prepared

3. Make the Pudding Layer: In a large bowl, whisk together the pudding mix and milk for 2 minutes. Let sit for 5 minutes to allow it to set. Use an offset spatula to spread the pudding in an even layer over the cream cheese mixture.

4. .Spread the remaining 8-ounce tub of Cool Whip on top and sprinkle with the reserved Oreo crumbs. Cover and refrigerate for at least 4 hours (or overnight) before serving. 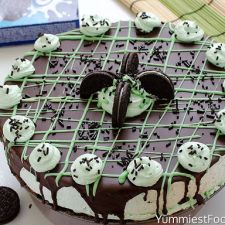