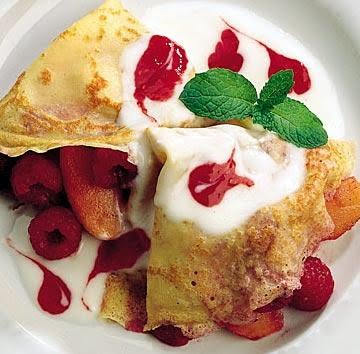 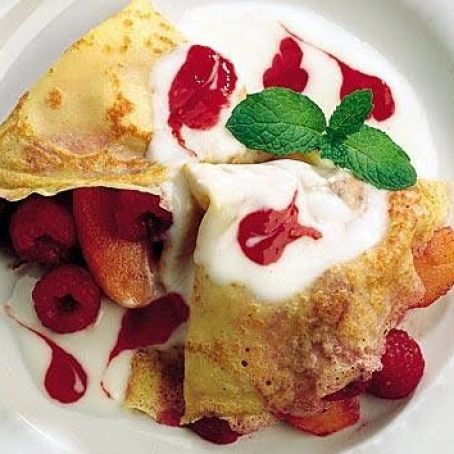 FOR CRÊPES: In a blender, combine flour, milk, water, eggs, butter, sugar and salt; purée until smooth. Transfer to a bowl and let stand, covered, 30 minutes.

Melt 1 tablespoon butter in an 8-inch well-seasoned crêpe pan or nonstick skillet over medium-high heat. Pour in 3 tablespoons batter, immediately tilting and rotating skillet to coat bottom. (If batter sets before skillet is coated, reduce heat slightly for next crêpe.) Return skillet to heat and cook crêpe until set and golden brown underneath, 1 to 2 minutes. Loosen edge of crêpe with a heatproof rubber spatula, then flip crêpe over carefully with your fingertips and cook until just set, about 30 seconds more. Transfer crêpe to a plate. Make 7 more crêpes in same manner, adding a little more butter to skillet before each one, and stacking them as cooked.

FOR FILLING: In the bowl of a food processor, purée 3/4 cup raspberries and 2 tablespoons sugar until smooth. Force mixture through a fine-mesh sieve into a bowl; discard seeds. Set raspberry sauce aside.

Core apples and cut into 1/4-inch wedges. In a large skillet, combine apples, remaining 3 tablespoons sugar and wine; bring to a boil, then reduce to a simmer and cook, covered, until apples are beginning to soften, about 3 minutes. Uncover and continue to cook until fruit is softened, about 2 minutes more. Stir in remaining raspberries and cinnamon; cook 1 minute more.

Fold crêpes in half, then divide onto serving plates. Top crêpes with filling and fold crêpes over. Divide yogurt and raspberry sauce among plates. Garnish with mint, if desired.