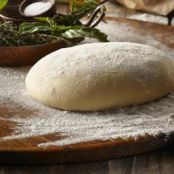 DOUGH:
Dissolve the yeast in the water and set aside for 5 to 10 minutes. Be sure that the water is warm, not hot. Temperatures of 120°F and above will kill the yeast, and your dough will not rise.

If using an upright electric mixer, use the mixing paddle attachment. This batch size is too small for the dough hook to be effective. Combine the yeast-water mixture, flour, sugar, salt1 tablespoon of extra virgin olive oil, and 1 tablespoon warm water in the mixing bowl. Do not pour the salt directly into the yeast water because this would kill some of the yeast. Allow these ingredients to mix gradually, use the lowest 2 speeds to mix the dough. Mix for 2 to 3 minutes, until the dough is smooth and elastic.

If using a food processor, using a dough blade made of plastic rather than the sharp steel knife attachment; proceed as for stand mixer. Mix just until a smooth dough ball is formed.

If mixing by hand, place the dry ingredients in a 4 to 6 quart mixing bowl. Make a well in the middle and pour in the liquids, reserving the teaspoon of olive oil. Use a wooden spoon to combine the ingredients. Once initial mixing is done, you can lightly oil your hands and begin kneading the dough. Knead for 5 minutes. When done the dough should be slightly tacky, that is, it should be barely beyond sticking to your hands.

Lightly oil the dough ball and the interior of a 1-quart glass bowl with 1 tablespoon of extra virgin olive oil. Place the dough ball in the bowl and seal the bowl with clear food wrap. Seal airtight. Set aside and let come to room temperature, about 70 to 70°F. Allow dough to rise until double in bulk, about 1 1/2 to 2 hours.

The dough could be used at this point, but it will not be that wonderful, chewy, flavorful dough that it will later become. Punch down the dough, re-form into a nice round ball and return it to the same bowl. Cover again with clear food wrap. Place the bowl in the refrigerator overnight, covered airtight.

About 2 hours before you are ready to assemble your pizza, remove the dough from the refrigerator. Use a sharp knife to divide the dough into 2 equal portions, 4 equal portions if making appetizer-size pizza, or if smaller 6-inch pizzas are desired.

Roll the smaller doughs into round balls on a smooth, clean surface. Be sure to seal any holes by pinching or rolling.

Place the newly-formed dough balls in a glass casserole dish, spaced far enough apart to allow for each to double in size. Seal the top of the dish airtight with clear food wrap. Set aside at room temperature until the dough balls have doubled in size, about 2 hours. They should be smooth and puffy.


STRETCH AND FORM THE DOUGH:
Sprinkle a medium dusting of flour over a 12x12-inch clean, smooth surface; a pizza peel is ideal for this. Use a metal spatula or dough spacer to carefully remove a dough ball from the glass casserole dish, being very careful to preserve its round shape. Flour the dough liberally. Place the floured dough on the floured smooth surface.

Use your hand or rolling pin to press the dough down forming a flat circle about 1/2-inch thick. Pinch the dough between your fingers all around the edge of the circle, forming a lip or rim that rises about 1/4-inch above the center surface of the dough. You may continue this outward stretching motion of the hands until you have reached a 9-inch diameter pizza dough.

Lightly sprinkle cornmeal, semolina, or flour over the surface of a wooden pizza peel. Arrange the stretched dough over the floured peel surface. Work quickly to dress the pizza so that the dough will not become soggy or sticky from the sauces and toppings.

When you are ready to transfer the pizza to the pizza stone in the pre-heated oven, grasp the handle of the peel and execute a very small test jerk to verify that the pizza will come easily off the peel. If the dough does not move freely, carefully lift the edges of the dough and try to rotate it by hand. Extreme cases may require that you toss more flour under the dough edges.

Once the dough is moving easily on the peel, open the oven and position the edge of the peel over the center of the stone about 2/3 from the front of the stone. Jiggle and tilt the peel to get the pizza to start sliding off. When the pizza begins to touch the stone, pull the peel quickly out from under it. Don't attempt to move the pizza until it has begun to set, about 3 minutes. The peel can be slid under the pizza to move it or remove it. 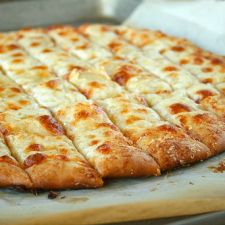