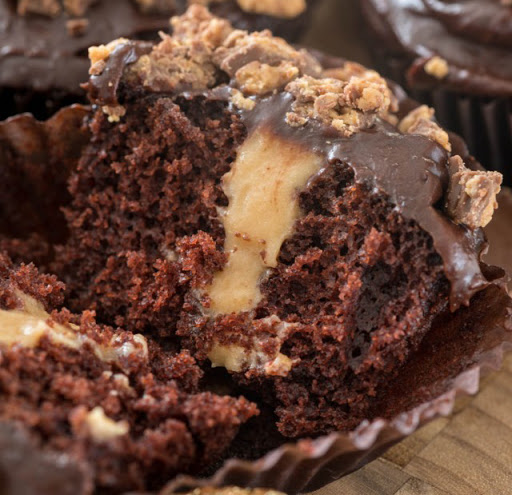 Peanut Butter Cup Cupcakes combine everyone's favorite two flavors, peanut butter and chocolate, to make a dozen decadent cupcakes that are perfect served for dessert any time of the year. Take this recipe to your next potluck and become the star of the show, because once everyone tries these sweet treats they will be asking for the recipe. 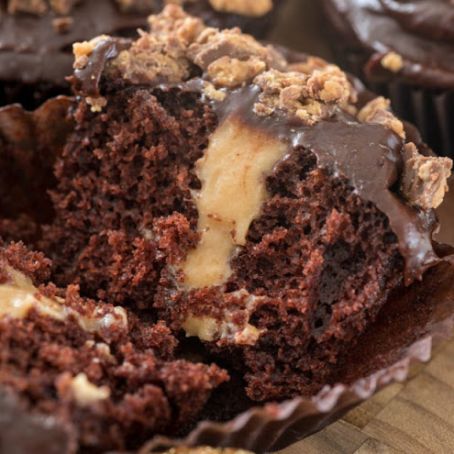 Want to skip the skip of making cupcakes from scratch? No problem, buy plain ones from the store or make them from a box mix and skip to the *.

Preheat oven to 350°F. Line cupcake pans with liners, around 30.

FOR THE CUPCAKES:
Whisk the flour, sugar, cocoa powder, baking soda, and salt in a large mixing bowl. Whisk the hot water, oil, vinegar, coffee (if using), and vanilla in a large measuring cup. Whisk, then stir, the liquid into the dry mixture.

*Divide batter evenly among cupcake liners, about 2/3 full, and bake for about 15 minutes, until a toothpick comes out clean. Cool completely before filling and frosting.

FOR THE FROSTING:
While the cupcakes are baking, make the frosting. The frosting requires cooling/chilling time. Melt the butter in a medium saucepan over medium-low heat. Stir in the sugar and cocoa. It will make a thick paste. Whisk together the heavy whipping cream, sour cream, vanilla, and coffee (if using) in a large measuring cup. Slowly stir the cream mixture into the saucepan, whisking as needed, until smooth. Cook until the mixture is thick and hot, 4 to 8 minutes (just until it starts to bubble), then cool for 2 to 3 hours. I like to cool it until the bowl is easy to touch, then chill it until it’s thick like frosting, stirring occasionally. Chilling will help it set faster, especially if it’s warm in your house.

FOR THE FILLING:
Beat peanut butter and sugar with a hand mixer or stand mixer fitted with the whisk attachment until smooth. Add in vanilla, then slowly add whipping cream and turn the speed to high. Beat until stiff peaks form. Chill until ready to use.