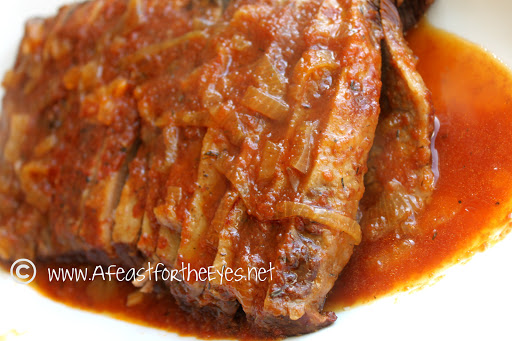 Brisket is a cut of beef that can be very tough, unless it is slow-braised or very slow grilled. The patience pays off, because the meat becomes very tender and moist. I saw this recipe on Cook's Country, and was intrigued that the recipe name comes from using Coca Cola (from where the soft drink originates). Instead of marinating the beef in Coca Cola (Cook's Country say it gave the beef a mush texture) and using packaged onion soup mix, this recipe uses ketchup, spices and herbs to make this a "scratch" brisket. The meat turned out really tender, and the sauce was absolutely delicious! It had the perfect balance of tomato, with just the right amount of acidity. Serve this with mashed potatoes, and you have a Sunday supper that your family will rave about. 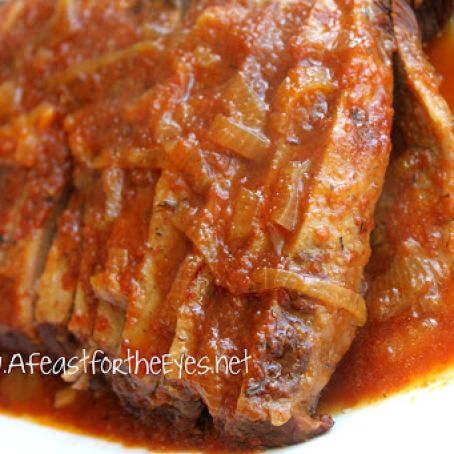 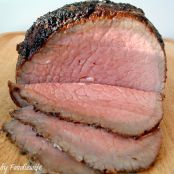 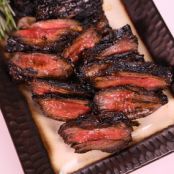 BRISKET:
Using fork, poke holes all over brisket. Rub entire surface of brisket with 1 tablespoon salt. Wrap brisket in plastic wrap and refrigerate for at least 6 hours or up to 24 hours.

Pat brisket dry with paper towels and season with pepper.

Heat 2 teaspoons oil in 12-inch nonstick skillet over medium-high heat until just smoking. Place brisket fat side down in skillet; weigh down brisket with heavy Dutch oven or cast-iron skillet and cook until well browned, about 4 minutes.

Transfer onions to 13x9-inch baking dish and spread into even layer.

Place brisket fat-side-up on top of onions and pour cola ­mixture over brisket.

Place parchment paper over ­brisket and cover dish tightly with aluminum foil. Bake until tender and fork easily slips in and out of meat, 3½ to 4 hours.

Transfer brisket to carving board. Skim any fat from top of sauce with large spoon.

Slice brisket against grain into 1/4-inch-thick slices and return to baking dish.

MKAE-AHEAD:
Cook brisket and allow brisket to cool in sauce, cover, and refrigerate overnight or up to 24 hours. To serve, slice brisket, return to sauce, and cover with parchment paper. Cover baking dish with aluminum foil and cook in 350°F oven until heated through, about 1 hour. 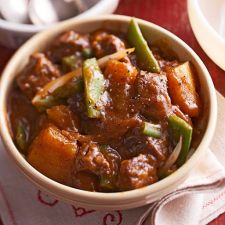