Simple to prepare, these Balsamic Glazed Steak Rolls have an impressive presentation and most importantly are absolutely delicious! Bon Appétit! 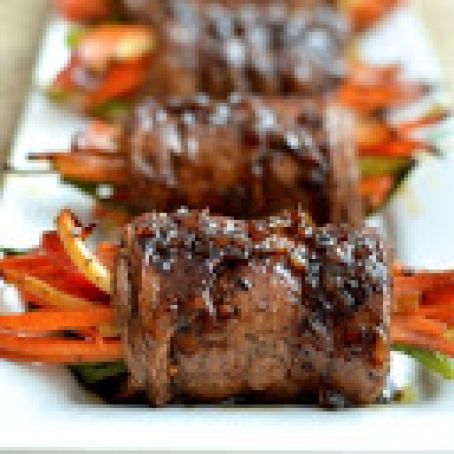 Start by prepping the steak. I used skirt steak because it’s what I had on hand, but in hind sight, I probably would have gone for a more leaner cut like flank steak or looked for thin sliced sirloin. I trimmed as much fat as I could and cut the steak into 3 inch wide strips. I managed 8 strips and used the odd shaped ends to taste test my marinade and balsamic glaze. You can then tenderize the meat with a meat hammer (if you’re using sirloin it doesn’t need any tenderizing).

Season the steak pieces generously on both sides with salt, pepper and Worcestershire sauce. And let them sit in the marinade for at least 30 minutes if not a couple hours.

While the steak is marinating you can prep the filling for them. Chop up the carrot, bell pepper and zucchini into matchstick size pieces, little longer than the width of the steak strips. I used a mandolin slicer to jet thin sliced and hand cut them to make matchsticks. I then cut the green onion in a similar size and sliced them in half length wise. For the garlic, simply peel and crush the cloves with the flat side of your knife, just enough to bruise them.

Now for the sauce, melt the butter in a small sauce pan on medium heat.

Add the finely chopped shallot and sautee it for a minute or 2 until they turn soft and translucent.

Add the balsamic vinegar, brown sugar and beef stock and stir to mix everything well.

Allow the sauce to come to a boil and reduce to almost half its volume. You’ll notice it starts becoming thicker and have the consistency of syrup. The butter also starts separating and comes to the top. Turn the heat off and transfer the sauce to a bowl.

In the same pan (no need to wash it) add a touch of olive oil and toss in the garlic cloves to allow them to flavor the oil for a few minutes.

Turn the heat up to high and toss in the carrots, bell pepper and zucchini (there’s no need to cook the green onion) and stir fry the veggies for no longer than 2-3 minutes.

Season them with the the Italian herb seasoning and salt and transfer the veggies to a bowl.

To assemble the steak rolls, simply take a strip of the marinated steak and lay it with the short side towards you. Place the veggies (don't forget the green onion!) in the middle and oil the beef up over the filling, securing it with toothpick. Repeat the same with the other rolls.

Heat a large skillet over medium-high heat. Add a touch of oil swirling to coat bottom. When hot, add beef rolls, seam side down, not touching and pan fry for a couple minutes. Then turn roll and cook it on all sides in the same way. Cook until you’re desired done-ness. I cooked mine medium well and seasoned it with some mesquite seasoning for a touch of a smokey flavor.

Remove the toothpick and serve with the balsamic glaze sauce spooned over the top of each roll.