“Sticky buns” are a common confection in Amish kitchens, although they seem more prevalent in Pennsylvania. They remind me of a cross between a cinnamon roll and a coffeecake. Either way,they are quite decadent. 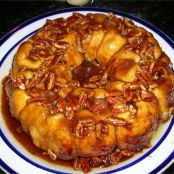 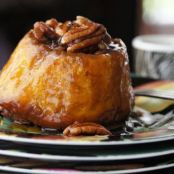 In a small saucepan heat the milk. Stir 6 tablespoons of the sugar and the salt into the milk until dissolved. Remove milk from heat and set aside to cool. Sprinkle yeast over the warm water and set it aside. Put 5 cups flour in a large bowl and make a well in the center. When the milk is cool, pour it into the center of the flour. Add the yeast mixture, 4 tablespoons of the butter and the egg. Stir with a wooden spoon until a soft dough forms.

Sprinkle your counter top or a cookie sheet with the remaining flour. Place the dough on the floured surface and knead until smooth. Oil a large bowl. Place the dough in the bowl, turning it until it is coated with oil. Cover the bowl with a towel and set aside in a warm place until the dough doubles in size, about 50 minutes.

Combine the 1 teaspoon cinnamon with the remaining 2 tablespoons sugar. Divide the dough in half and roll out each half to make a 12-inch square. Spread half of the remaining 1 tablespoon butter and sprinkle half the cinnamon-sugar on each square of dough. Roll up each square like a jelly roll and cut into 6 pieces. Place the pieces in the pan, swirl-side up. Cover the pan with a towel and set aside in a warm place to let the buns rise to double in size, about 1 hour.

When ready to bake, preheat oven to 350ºF. Bake the buns until they are nicely brown, about 25 minutes. Remove them from the oven and let sit for 5 minutes. Then turn the pan upside down onto a tray to remove the buns while still hot.