Apple fennel stuffing can be made as a casserole as detailed in this recipe, or used to stuff your favorite bird. The fennel adds a wonderful texture and flavor to the final dish. 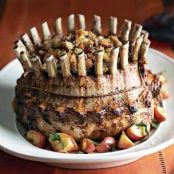 Crown Roast of Pork with Apple,... 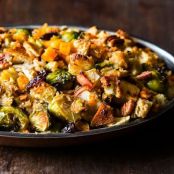 Melt butter in a large skillet over medium heat. Add onion, fennel, apples, cranberries, sage and thyme and cook 5 minutes. Season with salt and pepper. Add turkey or chicken broth and bring to a simmer. Remove from heat and allow to cool slightly.

Transfer mixture to a buttered baking dish and dot with butter. Cover and bake 30 minutes at 375°F.

Uncover and bake until golden, about 30 more minutes.

Here are some tips for converting any stuffing recipe for the slow cooker:
If it does not contain eggs, add 1 1/2 large eggs per loaf of bread used.
Cut back on liquid by 25%.
Cook on low heat for four to six hours.