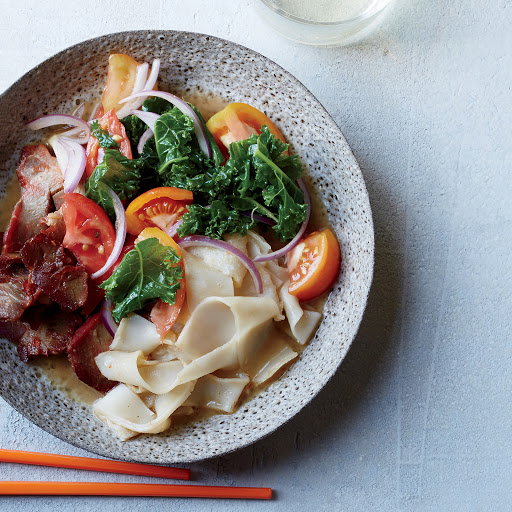 At Migrant in Maui, chef Sheldon Simeon makes his own chow fun noodles. They're the base for this unconventional dish that's topped with roast pork and a tangy kale salad and served with a buttery broth. 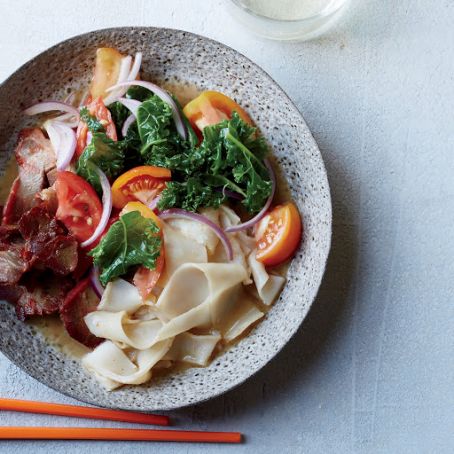 Make the brown butter broth In a small skillet, cook the butter over moderate heat, stirring, until golden, 3 to 5 minutes. In a small saucepan, combine the chicken stock, fish sauce and the ground annatto seeds and bring just to a boil. Transfer to a blender. With the machine on, gradually drizzle in the brown butter until incorporated. Keep warm.
Make the brown butter broth In a saucepan of salted boiling water, cook the noodles until al dente; drain well. Toss with a little canola oil.
Make the brown butter broth In a saucepan of salted boiling water, blanch the kale until tender, about 5 minutes. Drain and cool in a bowl of ice water. Drain again and pat dry. Transfer to a bowl and toss with the tomatoes, onion, lime juice and fish sauce. Season with salt.
In a wok or very large skillet, heat the 3 tablespoons of canola oil until shimmering. Add the noodles and cook over moderately high heat, stirring occasionally, until lightly browned and hot, 3 to 5 minutes. Remove from the heat and toss with the soy sauce and dashi powder. Season with salt.
Transfer the noodles to shallow bowls and top with the kale-tomato salad and roast pork. Serve right away, with the brown butter broth.

Mild-flavored annatto seeds (achiote) give dishes a bright-reddish color. They're sold at most supermarkets. 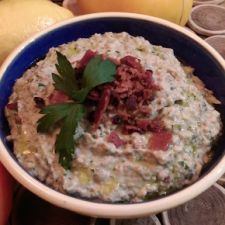