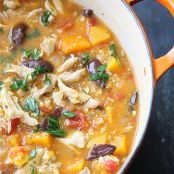 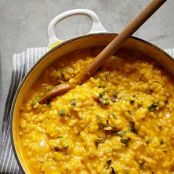 Preheat the oven to 400 degrees F. Line a baking sheet with aluminum foil.

Toss the butternut squash with the sugar and cinnamon in a large bowl. Spread out the squash on the prepared baking sheet. Cover with more foil and secure the edges. Roast until fork-tender, about 20 minutes. Remove the foil from the top and continue to roast until slightly golden, about 10 more minutes. Let cool and then puree in a food processor and set aside.

In a pot, bring the sugar, cream, condensed milk, cinnamon sticks, pumpkin pie spice and 1 cup of the milk to a boil.. In a medium bowl, mix the cornstarch with the egg yolks and remaining 1/2 cup milk.

Remove the cinnamon sticks carefully from the milk mixture and temper the cornstarch mixture with it, whisking the hot mixture by the ladleful into the cornstarch mixture. Return the tempered mixture to the pot and add 2 cups of the squash puree (reserve the remaining puree for another use). Cook on medium-high heat, stirring constantly, until the pudding thickens, 8 to 10 minutes. Remove from the heat, add the vanilla and butter and mix until incorporated.