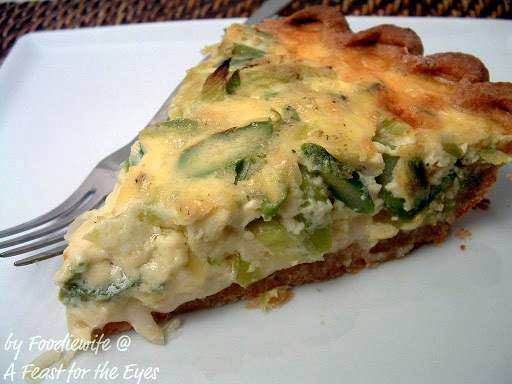 I got the idea of making this quiche from Martha Stewart’s Every Day Food TV show, but I used my own favorite pie crust. The crust uses organic pastry flour (with whole wheat). It’s flaky and very flavorful. This asparagus, leek and Gruyere cheese quiche is perfect for the abundance of Spring/Early Summer asparagus. 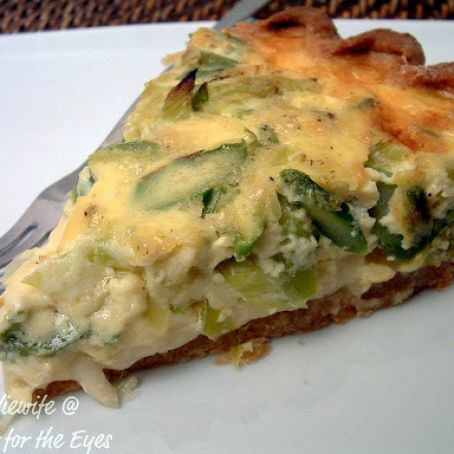 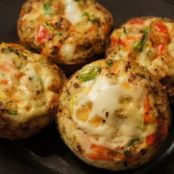 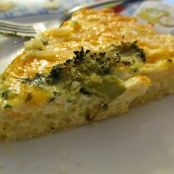 Prepare the pie crust (or use store bought):

NOTE: The key to making tender pie crusts is to work with very cold butter, and don't overwork the dough! Allowing the dough to rest, helps to relax the gluten, too.

For the crust:
Combine the flour*, sugar, salt and baking powder in the work bowl of a food processor fitted with a metal blade. Pulse several times to combine.

Add the butter and pulse about 10 times until the dough becomes pebbly in texture. DO NOT OVERWORK THE DOUGH! YOU WANT TO SEE BITS OF BUTTER.

Add the eggs and pulse repeatedly until the dough begins to stick together.

Slowly add the ice water (NOT COLD TAP WATER) by the tablespoonful, while using a few long pulses. Add more drops of ice water as necessary, until the dough holds together well.

Invert the dough onto a floured work surface and divide in half.

Form a ball out of each half and flatten into a disc; wrap each disc in plastic wrap and refrigerate while preparing the filling. (Dough can be refrigerated for up to 2 days before continuing.)

If you don't have a processor, combine the dry ingredients in a bowl; add chunks of chilled butter, and using a pastry blender or two forks, chop the butter until it resembles little pebbles. At this point, add the eggs and ice water, and stir with a spoon until the dough begins to form. Using your hands and working the dough as little as possible, transfer it to a lightly floured surface. Knead until the dough holds together. Divide the dough into two equal balls and flatten into discs; wrap each disc in plastic and refrigerate while preparing the filling. (Dough can be refrigerated for up to 2 days before continuing.)

I will freeze the second pie crust dough for a future pie recipe, as I only needed one crust for this dessert.

NOTE: I used Organic Pastry Flour, which has more wheat flour. The crust was very tender and a bit healthier than all-purpose flour. Either way will work fine.

TIP: The key to making tender pie crusts is to work with very cold butter, and don't overwork the dough!
Allowing the dough to rest, helps to relax the gluten, too.


FOR THE QUICHE:
Preheat oven to 350°F, with rack in lowest position.

In a large skillet, melt butter over medium. Add leek and asparagus; season with salt and pepper. Cook, stirring occasionally, until asparagus is crisp-tender, 6 to 8 minutes; let cool.

Bake until center of quiche is just set, 50 to 60 minutes, rotating sheet halfway through. Let stand 15 minutes before serving. (To store, let cool, then refrigerate, up to 1 day. Reheat at 350°F until warm in center, about 30 minutes.) 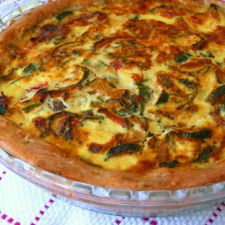