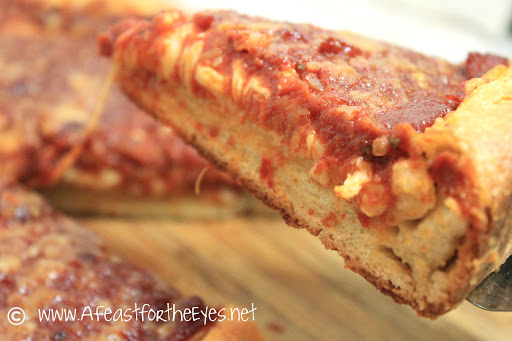 I've never been to Chicago, so I cannot vouch for the authenticity of this Chicago-Style Deep Dish Pizza recipe, from America's Test Kitchen. This pizza crust is very thick, yet very tender on the inside. To make this pizza dough, I added some cornmeal. Once it has it's first rise, I rolled out the dough, spread a very thin layer of butter and "laminated" the dough by rolling it into a tight roll, then pressing it out with a rolling pin. The second rise was done in the fridge, so that the butter could harden-- thus giving some light layers of dough. The sauce is homemade, very thick, from crushed tomatoes. Plan on 3 hours to make this, but it's so worth it. Once assembled, the dough is placed in an oiled cake pan, then a layer of shredded mozarella cheese, a layer of sauce and some shredded Parmesan. This was outstanding! I'll make it again, and have fun layering some meats on this as well. Well done, America's Test Kitchen! 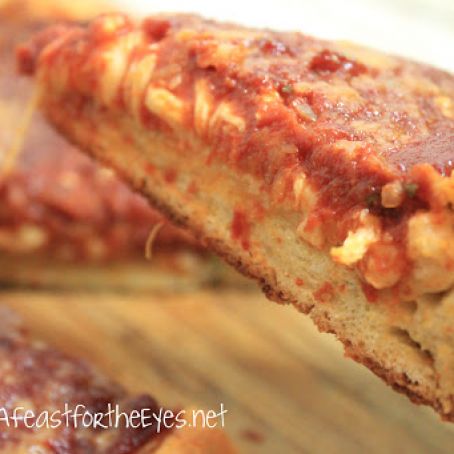 Mix flour, cornmeal, salt, sugar, and yeast in bowl of stand mixer fitted with dough hook on low speed until incorporated, about 1 minute.

Add water and melted butter and mix on low speed until fully combined, 1 to 2 minutes, scraping sides and bottom of bowl occasionally.

While dough rises, heat butter in medium saucepan over medium heat until melted.

Add onion, oregano, and 1/2 teaspoon salt; cook, stirring occasionally, until liquid has evaporated and onion is golden brown, about 5 minutes.

Add garlic and cook until fragrant, about 30 seconds.

Stir in tomatoes and sugar, increase heat to high, and bring to simmer.

Off heat, stir in basil and oil, then season with salt and pepper.

Starting at short end, roll dough into tight cylinder. With seam side down, flatten cylinder into 18- x 4-inch rectangle.

Cut rectangle in half crosswise.

Working with 1 half, fold into thirds like business letter; pinch seams together to form ball. Repeat with remaining half.

Return balls to oiled bowl, cover tightly with plastic wrap, and let rise in refrigerator until nearly doubled in volume, 40 to 50 minutes.

Transfer 1 dough ball to dry work surface and roll out into 13-inch disk about 1/4 inch thick.

Transfer dough to pan by rolling dough loosely around rolling pin and unrolling into pan.

For each pizza, sprinkle 2 cups mozzarella evenly over surface of dough.

Bake until crust is golden brown, 20 to 30 minutes. Remove pizza from oven and let rest 10 minutes before slicing and serving. 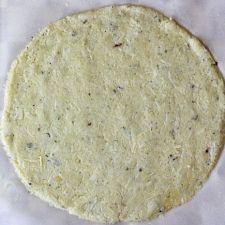