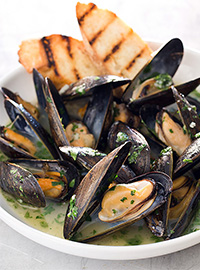 To even out the cooking of our steamed mussels and prevent overcooking, we move them to the gentle, enveloping heat of the oven, in a large roasting pan, so they aren’t too crowded. 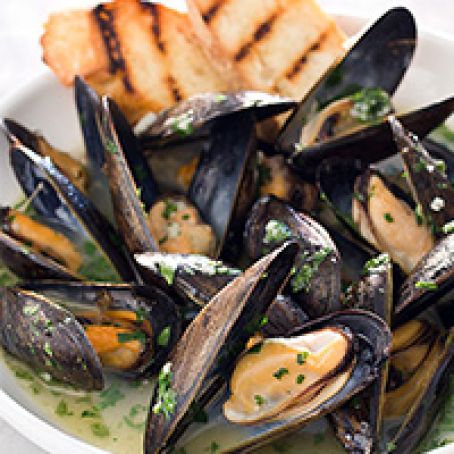 Discard any mussel with an unpleasant odor or with a cracked or broken shell or a shell that won’t close. Do not substitute a sweet cider for the hard cider. Serve with crusty bread.
1. Adjust oven rack to lowest position and heat oven to 500 degrees. Heat oil and bacon in large roasting pan over medium heat; cook, stirring occasionally, until bacon has rendered and is starting to crisp, about 5 minutes. Add cider, thyme sprigs, and bay leaves and bring to boil. Cook until cider is slightly reduced, about 1 minute. Add mussels and salt. Cover pan tightly with aluminum foil and transfer to oven. Cook until most mussels have opened (a few may remain closed), 15 to 18 minutes.
2. Remove pan from oven. Push mussels to sides of pan. Add cream to center and whisk until incorporated. Discard thyme sprigs and bay leaves, sprinkle parsley over mussels, and toss to combine. Serve immediately. 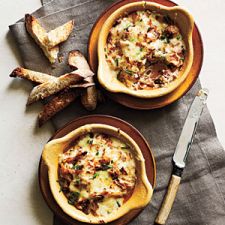