My family loves this. My kids could drink the sauce. I double this recipe when I use a London Broil. I also cook to medium rare but that is a preference. Since I cut the London Broil in half if I have company I will cook the other half a little longer. 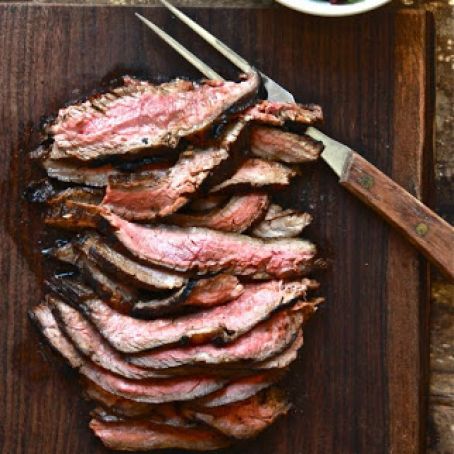 If using London Broil, stab the steak all over with a meat knife tenderizer or a fork.
All depends on the cut of the meat of course.

Combine all ingredients in a bowl, pour over the meat, and refrigerate for at least 24 hours. Turning every six or eight hours.

Remove from marinade, place on grill, or on broil in oven. Place left over marinade into a saucepan, heat to boiling and add a tbsp of cornstarch mixed with 2 tbsp water to the mixture to slightly thicken. Should not be overly thick. Stir for boil for one minute (no longer or the cornstarch will become thin again). Remove from heat. Use as a sauce for the steak.

Remove stake when desired doneness, let rest for 10 minutes and slice against the grain into slender slices.

Serve with the sauce to spoon over the steak.

I serve with a baked potato and a tossed salad.