Preheat the oven to 350°. In a food processor, pulse the mushrooms until coarsely chopped. In a large saucepan, melt the stick of butter. Add the onion and celery and cook over moderately high heat, stirring, until softened, about 6 minutes. Add the mushrooms and cook, stirring, until their liquid evaporates and they begin to brown, about 6 minutes. Sprinkle the flour over the vegetables and cook, stirring, for 1 minute. Add the chicken stock and cook, scraping up any bits stuck to the pan, until the mixture is very thick, about 3 minutes. Remove from the heat and stir in the milk. Season with salt and pepper. Transfer to a large bowl to let cool, then stir in the mayonnaise.

Arrange the broccoli florets and stems in a large steamer basket and steam until barely crisp-tender, about 3 minutes. Add the broccoli to the mushroom mixture and season with salt and pepper.

Butter a 13-by-9-inch baking dish. Pour in the broccoli-mushroom mixture, smoothing the surface. Sprinkle the cheese on top. In a small bowl, toss the cracker crumbs with the melted butter and scatter them over the casserole. Cover with foil and bake for about 30 minutes, until bubbling. Remove the foil and bake for about 40 minutes longer, until the topping is golden and crisp. Serve warm or at room temperature. 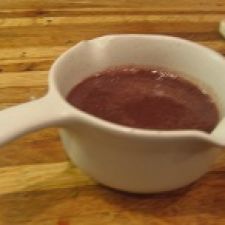