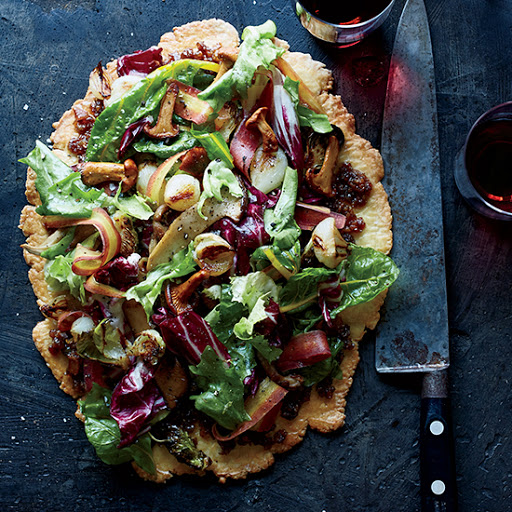 For this main-dish tart, chef Timothy Hollingsworth fills a sturdy crust with savory-sweet bacon marmalade and a spectacular pile of roasted and raw vegetables. 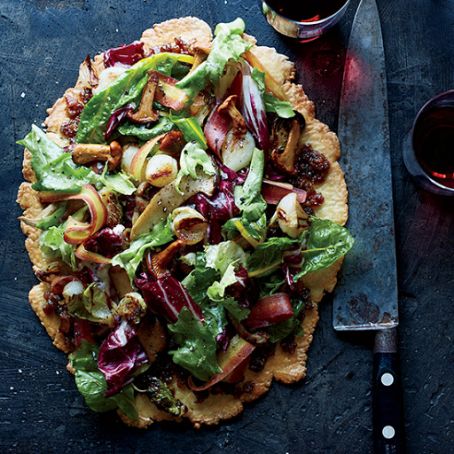 Make the marmalade In a large skillet, cook the bacon in the oil over moderately high heat, stirring occasionally, until browned and crisp, about 8 minutes. Using a slotted spoon, transfer to a paper towel–lined plate to drain.
Pour all but 2 tablespoons of the fat from the skillet into a heatproof bowl. Add the shallots to the skillet and cook over moderately low heat, stirring, until softened but not browned, about 3 minutes. Add the vinegar and brown sugar and cook over moderately high heat, stirring occasionally, until the vinegar is reduced by half, about 2 minutes. Whisk in the chicken stock and cook until reduced to a thick syrup, about 5 minutes. Stir in the bacon and whisk in 1/3 cup of the reserved bacon fat. Let cool until thickened slightly, then season with salt and pepper.
Make the crust Preheat the oven to 350°. In a stand mixer fitted with the paddle, combine the flour, sugar and a generous pinch of salt. At medium speed, gradually add the melted butter and the egg until a dough forms. Turn the dough out onto a lightly floured work surface, gather up any crumbs and press the dough into a disk. Working on a sheet of parchment paper, roll out the dough to a 12-by-10-inch oval, about 1/8 inch thick. Slide the dough on the parchment onto a large baking sheet; brush with the egg wash and top with another sheet of parchment paper and another baking sheet. Bake for about 10 minutes, until just set. Remove the top baking sheet and parchment paper and bake the crust for 10 minutes more, until browned and crisp. Transfer to a rack to cool.
Meanwhile, make the topping On a large rimmed baking sheet, toss the mushrooms with the brussels sprouts, pearl onions and oil. Season generously with salt and pepper. Bake for about 35 minutes, until the vegetables are tender and lightly browned. Let cool slightly.
Transfer the crust to a platter and spread half of the bacon marmalade on top. In a large bowl, toss the roasted vegetables with the escarole, Swiss chard, shaved carrot and radicchio; season with salt and pepper. Pile the vegetables on the crust and serve. 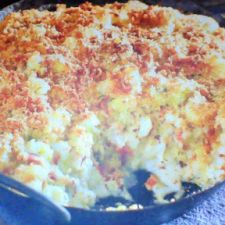