Pagnotta is typical of central Italy, a rustic peasant loaf with a hard, deep brown crust and a soft center. In northern Italy, this bread is made into small round rolls. These make wonderful soup bowls. They can also be used for dips and spreads. This dough can also be used to make pizza crusts, or focaccia.

To make the dough:
Put the flour in a bowl and add yeast to it. Mix. Add the salt after mixing the yeast into the flour. Add your olive oil and 3/4 cup of water. If using a stand mixer, mix on low speed with paddle. Begin adding the remaining water. The water will be your variable, not your flour. Add water until the dough appears quite sticky.

If using a mixer, change to the dough hook. If working by hand, begin kneading process. The dough will appear stickier than you are probably used to. Knead by machine for about 4-5 minutes or by hand until dough is elastic. Finish off the mixer kneading by some hand kneading as well. Put the dough in a bowl rubbed with olive oil and cover with plastic wrap.

Either let rest in the refrigerator overnight for a long, cool rise or let rise at room temperature for 1 1/2 hours. Punch down the dough, fold and tuck the dough, and let rise another hour.

Baking:
Preheat the baking stones in the center of oven at 425 degrees. Before slashing the bread, throw 1/4 cup of water into the bottom of the oven for steam. Turn the loaf right side up onto a peel. Slash the top of the bread and put into the oven. Add another splash of water to the bottom of the oven. After 10 minutes, reduce heat to 400°F. Bake for a total of about 20-25 minutes or until internal temperature of the loaf is about 200 degrees. Remove and cool completely.

Making soup bowls:
When round is completely cooled, using a serrated knife, cut a hold in the top of the loaf. Hollow out much of the internal dough and save for other uses, or to eat! When ready to serve, pour soup into "bowl" and serve immediately.

Freezing Bread:
Double wrap bread with plastic wrap. Then place into a ziplock bag. When ready to serve. Thaw completely and then pop bread into the oven for 5 minutes at the same temperature you baked it at, until it is crisp. Add water to the bottom of the oven pan. 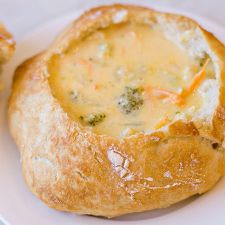