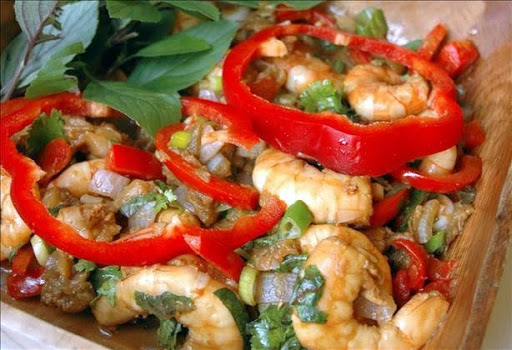 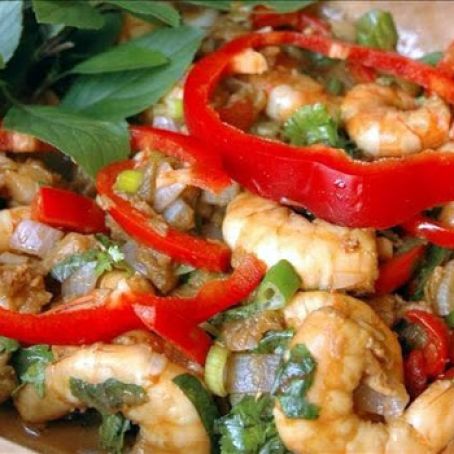 A note on ingredients: The original recipe called for 2 seeded chopped jalapeños, I toned it down by using seeded toasted poblano peppers or you can use any not-so-hot pepper. I use the jumbo shrimp and they are work for this recipe. Adventurous try adding lobster meat and/or squid. I use fresh pineapple in this recipe.

Start by placing the shrimp in a large self-close bag or medium glass bowl. Add the peppers, garlic, ginger, honey, soy sauce, and coconut milk. Allow to marinate in the refrigerator for 30 minutes to 4 hours.

Turn heat up to high and place the shrimp (not the marinade, just the shrimp) in the skillet. Sauté, turning once, until shrimp are just slightly browned on the outside and turning pink. You want them slightly undercooked.

Remove shrimp, onions, and peppers from the skillet. Pour the marinade into the skillet and bring it to a boil. Boil it for 5 minutes. This is long enough to cook the "shrimp juice" that got into the marinade and also to thicken the sauce.

Turn the heat off. Add the shrimp mixture back to the skillet. Add the basil and green onions. Toss to combine. Serve immediately over rice.

Bring to a boil and then reduce heat. Cook covered. Simmer for 15-20 minutes or until liquid has been absorbed by the rice. Add pineapple. Fluff with a fork.

Outback Steakhouse's Shrimp On The Barbie