Cheesecake cooked in a slow cooker has an unbelievably silky texture because the machine steams the cake as it bakes. The toughest part about making it is resisting the urge to peek inside the slow cooker—the lid must stay closed to retain heat. 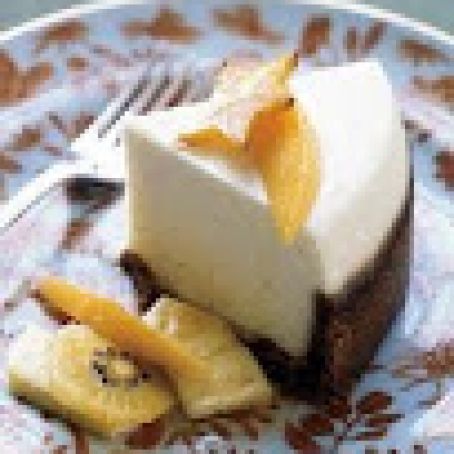 n a medium bowl, mix the graham cracker crumbs with the melted butter, cinnamon, 1 tablespoon of the sugar and a pinch of salt. Press the crumbs over the bottom and 1 inch up the side of a 6-inch springform pan that’s 3 inches deep.

In a standing mixer fitted with a paddle, combine the cream cheese with the flour, the remaining 2/3 cup of sugar and 1/4 teaspoon of salt. Beat at medium-high speed until smooth, about 2 minutes. Scrape down the side of the bowl and add the eggs and the almond extract. Beat at medium speed until blended. Add the sour cream and beat until smooth. Pour the batter into the springform pan.

Fill a 6- to 7-quart round or oval slow cooker with 1/2 inch of water and position a rack in the bottom. Set the cheesecake on the rack. Cover the slow cooker with a triple layer of paper towels and the lid. Turn the cooker to high and cook for 2 hours without peeking. Turn off the heat and let stand until the slow cooker has cooled, 1 hour.

Remove the lid and the paper towels and transfer the cheesecake to a rack to cool to room temperature, about 1 hour. Cover the cheesecake with plastic wrap and refrigerate until chilled, at least 4 hours.

Heat a sharp, thin-bladed knife under hot water; dry the knife. Carefully run the knife around the edge of the cheesecake. Release the spring and lift the cheesecake out of the mold. Cut into wedges and serve.