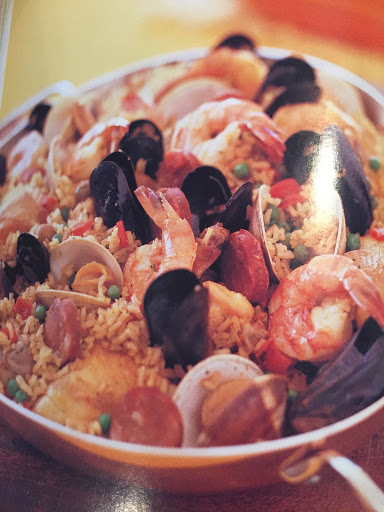 Paella, one of the best-known dishes in Spanish cooking, has a reputation as a daunting dish to prepare, That just isn't true -- it's fairly quick and lots of fun to make, Try it the next time you have people over for dinner. 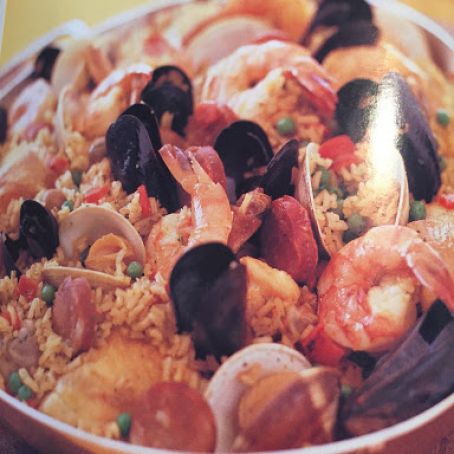 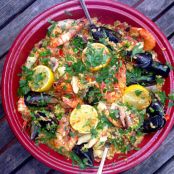 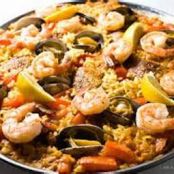 1. Heat the oil in a paellera or similar pan over medium-high heat until rippling. Season the chicken with salt and pepper and add to the pan pieces, skin, side down as fit without touching. Cook, turning as necessary, until well browned on all sides, about 10 minutes. Remove pieces as they are done and set aside. Adjust the heat under the pan, especially after you start removing chicken, so the chcken browns without oil dakening.

3. Stir in the rice until coated with oil. Return the chicken to the pan, pour in enough clam juice to cover the rice by 1/2 inch (the shellfish will contribute more liquid), and bring to a boil. Cook over high heat until the level of liquid reaches the rice. Nestle the shellfish into the rice in and among the chicken pieces. Adjust the heat to low, cover the pan, and cook until the rice is tender, the liquid has been absorbed, and the chicken is cooked through. Timing will vary depending on your pan; check after 20 minutes.

4. Scatter the peas and roasted red peppers over the top, give the paella a big stir, and serve immediately. 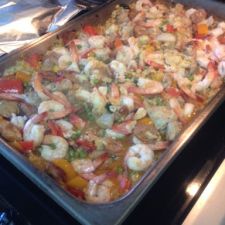