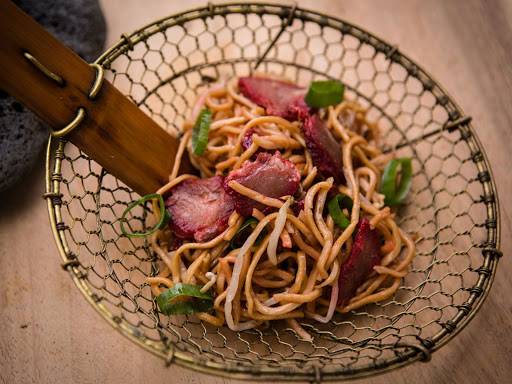 Hawaii, recipe, sweet and sticky pork, sesame noodles
Enlarge
James Fisher
For their twist on classic char siu, Hawaiian islanders typically marinate wild boar in this Chinese-style barbecue sauce. Although traditional char siu includes red bean curd or food coloring to lend a distinctive red ring around the outside of the meat, it's just as tasty without it. Note: Allow at least 6 hours for marinating pork. 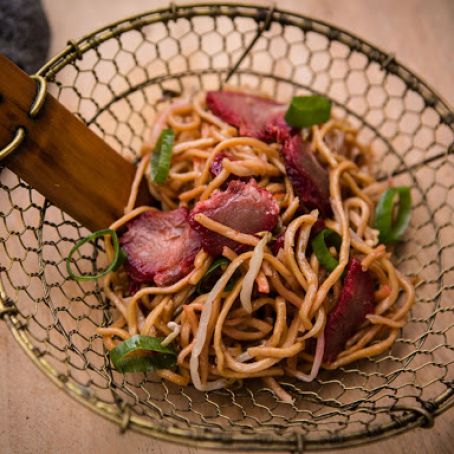 In a large resealable plastic bag, combine the pork with the hoisin, honey, 2 tablespoons of the soy sauce, the rice wine, and five-spice powder. Close the top and toss to mix evenly. Let marinate in the refrigerator at least 6 hours or overnight.
Heat the oven to 300°. Transfer the pork and its marinade to an 8-inch-square baking dish, cover with foil, and bake until the pork is very tender, about 1 1⁄2 hours. Uncover the pork and transfer to a work surface. Slice the pork crosswise into 1⁄4-inch-thick slices.
Meanwhile, pour the marinade into a small saucepan and bring to a boil over medium-high heat. Cook the marinade, stirring, until reduced by two-thirds, about 4 minutes. Remove from the heat, and then stir in the sliced pork to coat.
In a large saucepan of boiling salted water, add the noodles and cook, stirring, until al dente, 2 to 3 minutes. Drain the noodles in a colander, and rinse under cold water. Drain the noodles once more, and then transfer the noodles to a large bowl and toss with the sesame oil.
In a large wok or cast-iron skillet, heat the vegetable oil over high. Add the sprouts and scallions and cook, tossing constantly, until fragrant, 20 seconds. Stir in the pork and cook, tossing, until warmed through, about 1 minute. Remove from the heat and stir in the noodles along with the remaining 1 teaspoon soy sauce until evenly combined. Transfer to a serving platter and garnish with sliced scallion before serving.