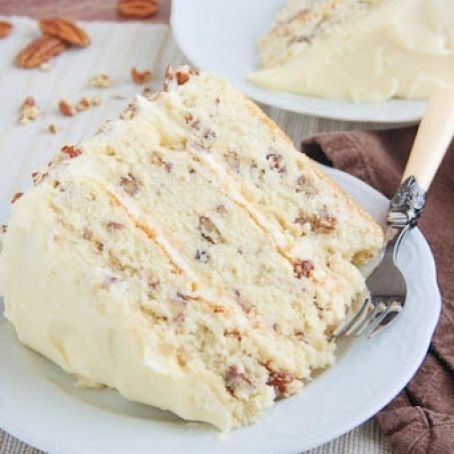 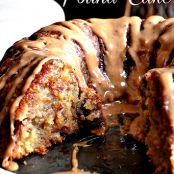 Preheat oven to 350 degrees F. Butter and flour three 9″ round cake pans.
In a medium heavy skillet, melt ¼ butter over medium heat. Add pecans;
cook until toasted and fragrant, about 4 minutes. Spread across sheet
of foil to cool.
In a large bowl, sift together flour, baking powder, and salt. Whisk
to combine; set aside.
In a separate large mixing bowl, cream together butter and sugar until
light and fluffy, 3-4 minutes. Add eggs, one at a time, beating well
after each addition. Beat in vanilla.
Add flour mixture alternately with milk, beginning and ending with the
flour (flour in 3 parts, milk in 2). Fold in toasted pecans.
Divide between cake pans and bake 25-30 minutes until a toothpick
inserted near the center comes out clean. Cool for 10 minutes on a
wire rack before removing from pans. Cool completely.
FOR FROSTING: In a large mixing bowl, beat the cream cheese, butter,
confectioners’ sugar, and vanilla. Beat in enough milk, as necessary,
to achieve spreading consistency. Frost cake. Store in refrigerator.
Notes


You may not need to add any milk to the frosting if it is already soft enough.
NOTE: I had barely enough frosting to cover a 3 layer cake with the
recipe. Consider making 1½ times the given frosting recipe, especially
if piping.
NOTE: The cake batter itself seems to be based off the old-fashioned
1-2-3-4 cake (1 cup butter, 2 cups sugar, 3 cups flour, and 4 eggs).
That is if you don’t count the extra ¼ cup of butter used to toast the
nuts. I wasn’t completely impressed with it, but I didn’t think it was
bad (a tad dry). I will say though, if you have a favorite white or
yellow cake recipe, you should use that instead and then follow the
same step for making the toasted butter pecans, add them in, and
absolutely use this frosting recipe. If you want to use your own TWO
layer recipe instead of a three, then you’ll need to use less pecans,
maybe just 1¼ cups would be perfect.