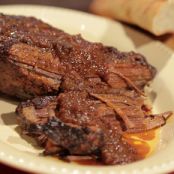 IN a small bowl, combine celery salt, 2 cloves of the garlic, pepper, liquid smoke, and worcestershire. Pour over the meat and seal the bag. Refrigerate for 24 hours, turning bag over several times.

REMOVE meat and place on a piece of heavy duty foil, 18x25 inches. Pour marinade over meat and seal the foil. Place in a 10x15 inch baking pan. Bake in a 300 oven for 5 hours.

MEANWHILE, remove and discard stems and seeds from chiles. Place chiles in a bowl and pour boiling water over them; let stand until soft about 20 minutes. In a blender, whirl chiles and about half of the soaking liquid (reserve remainder) to make a thick puree. Set aside.

IN a 2 quart pan, heat oil over medium heat; add flour and stir until lightly browned. Stir inremaining 2 cloves of garlic, cumin, and oregano. Place a wire strainer over pan. Add pureed chiles, forcing them through the strainer with the back of the spoon; add remaining soaking liquid to help force puree through. Cook stirring until bubbly. Season to taste with salt.

LIFT brisket from foil and cut across the grain into 1/4 inch thick slices. Drain chile sauce into a pan. Discard solidified fat from chilled marinade; add marinade sauce to chile sauce and heat over medium heat. Serve meat and sauce in tortillas. Top with lettuce and cheese.