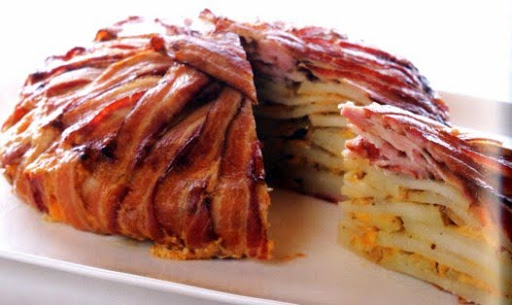 "I’ve been making this dish for a long time. It’s a bit involved but it remains one of the most impressive potato dishes I know. This special occasion treat features the classic trio of potatoes, bacon and cheddar. It will take you a while to make, but the results are more than worth it. It’s the sort of thing that looks complicated until you try it and quickly realize how simple it is to master." - Chef Michael Smith 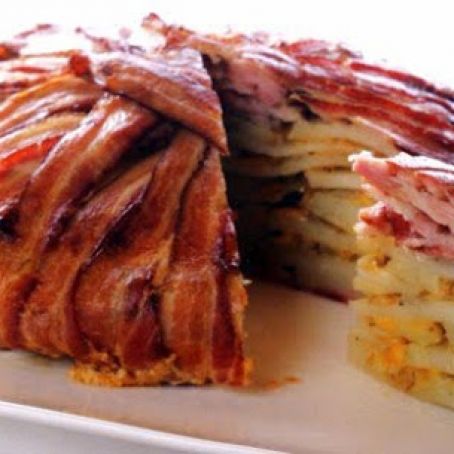 Carefully arrange the bacon in a radial pattern from the center of the bottom of a ten-inch, non-stick pan to the lower edge of the rim and continuing up and over it. Let the ends hang over.

The slices should overlap slightly around the sides of the pan. To reduce the thickness of the bacon in the center stagger every other piece starting it two inches from the center and extending it further than the adjacent slices.

With the palm of your hand, flatten the center area, leaving no gaps in the bacon. Season the bacon with pepper then sprinkle on several tablespoons of the grated cheddar.

Slice the potatoes as thinly and uniformly as you can, about a quarter inch thick. Arrange a circular pattern of overlapping slices around the inside bottom edge of the pan. Continue arranging overlapping layers of the potatoes until the bottom is evenly covered.

Season the potatoes with salt and pepper. Mix the onions and garlic together and sprinkle some of the mixture onto the potatoes. Continue with a layer of the grated cheese. Cover with another layer of the potato pressing it down firmly before continuing with alternate layers of the potatoes, onion mixture and cheese until the pan is full. Continue with several more layers in setting each a bit from the edge of the pan until the top is an inch or so higher than the pan’s rim. Fold the overhanging bacon neatly up and over the top of the potatoes. Trim a small piece of parchment paper and place it in between an ovenproof lid and the bacon. This will prevent the bacon’s ends from pulling back and shrinking during cooking.

Place the tart pan on a baking sheet and bake for at least two and a half to three hours. You’ll know it’s done when a small thin bladed knife inserts easily. Pour off as much of the fat around the edges as possible. Let the tart stand for fifteen minutes then invert it onto a cutting surface. Slice into wedges and serve immediately. You may refrigerate any leftovers and reheat them later it in a microwave. 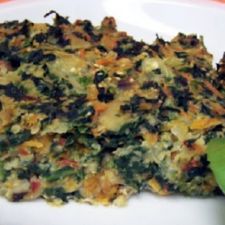