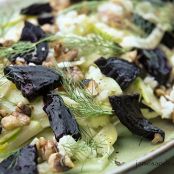 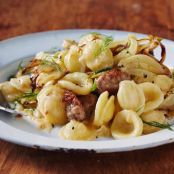 Melt butter in large skillet and add fennel and leeks and saute gently for 4-5 minutes or until soft, don't brown. Transfer to a bowl and set aside.

Add pork to large plastic bag, add flour and season with salt and pepper, and toss until pork is well coated. Add olive oil to large skillet and brown the pork in batches over medium heat. Remove pork and add apple juice, increase heat and stir up the brown bits from the bottom. Add the tea mixture and boil, add pork, fennel, leeks and potatoes. Cover and place in oven.

Cook for 45 minutes. Remove from the oven and add peas, mix cornstarch with a little cold water to make a paste, add slowly to hot liquid.

Return to oven and continue cooking until sauce thickens. Season with salt and pepper if needed and garnish with chopped mint leaves.