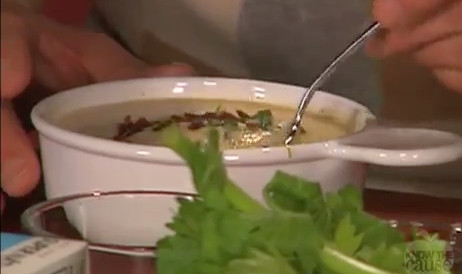 This soup looks and tastes just like the real thing, but healthier. 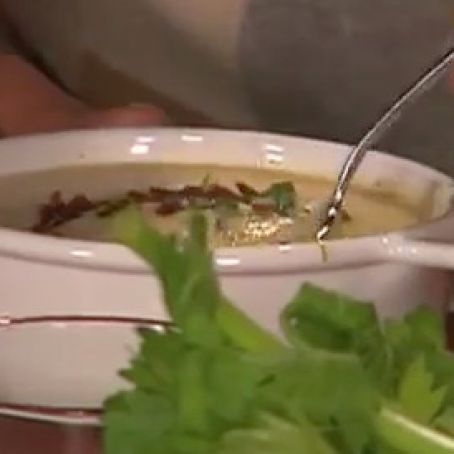 Cut onion and celery into a large dice.
Place into a bowl and set aside.
Roughly chop garlic cloves and set aside in a small dish.

Heat a large soup pan over medium heat and melt 1-tablespoon butter.
Add bacon.
Flip bacon with tongs to crisp both sides.
About 5-7 minutes.
While bacon is cooking, cut cauliflower into florets and set aside.

Once bacon is crispy remove from pan, place on a plate in a single layer and set aside.
It will continue to get crispier as it cools.

Add rest of butter, onions and celery to the soup pan that you cooked the bacon in.
Scrape up the brown bits from the bottom of the pan as you stir ingredients together.
This will add delicious flavor to the soup.

Reduce heat to medium-low, add garlic and cook for about 3 minutes.

Add 1- 32oz box (4 cups) chicken broth, kombu and astragalus (if using) and cauliflower to the soup pan. Bring to a boil and then down to a simmer.
Cook for about 5 minutes or until soft when pricked with a fork.

While cauliflower is cooking, slice green onions and bacon into small pieces for garnish. Place each one in a separate bowl.

Add salt and pepper to taste.

Serve hot with a sprinkle of green onions, bacon and a dollop of sour cream, if so desired.

Store soup in a glass Pyrex container in the refrigerator up to 4-5 days or freeze.
Use extra broth to thin out when re-heating soup. It thickens up once chilled.

You can find kombu in the Asian section at most health food stores.
You can grind the kombu in a nut and spice grinder and leave in the soup, or just put a piece in and take it out before pureeing.
Astragalus root looks like a tongue suppressor and can be found at some health food stores and online.
Kombu and astragalus are both powerhouses for your immune system and an easy way to add nutrition to your diet. 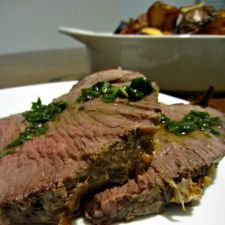