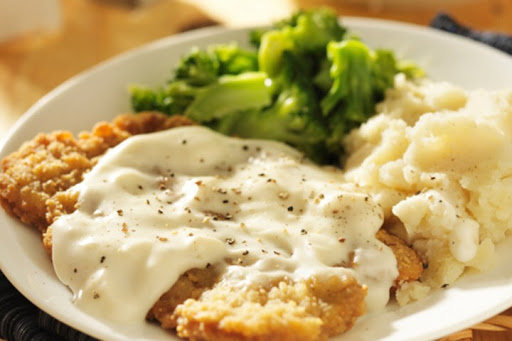 "Just because a recipe calls for "cream gravy," it doesn't mean it has to be unhealthy. Paula Deen used healthier substitutions to make a slimmed-down version of this Southern classic." 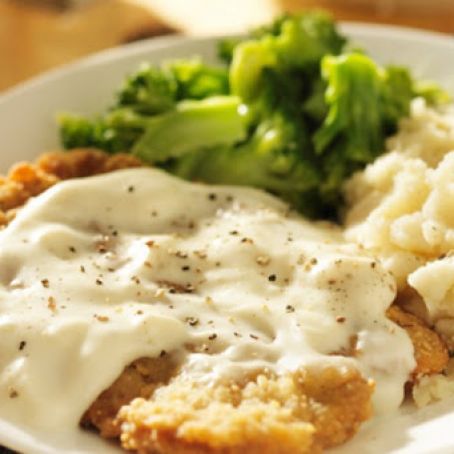 1. In a shallow bowl or pie plate, whisk the egg whites with 2 teaspoons water. In a separate bowl or pie plate, whisk together 1/2 cup of the flour, the salt, pepper and garlic powder. Dip the steaks, one at a time, into the egg whites, letting any excess drip off. Then dip the steaks into the flour mixture. Gently shake each steak to remove any excess.

2. In a large nonstick skillet, heat 2 tablespoons of the oil over medium-high heat. Add the steaks and cook until well-browned, 3 to 4 minutes per side. Transfer to a paper towel-lined plate to drain.

3. Add the remaining 1 tablespoon oil to the skillet. Add the onion and cook over medium heat until soft, 3 to 5 minutes. Stir in the remaining 1 tablespoon flour and cook for 1 minute. Slowly whisk in the chicken broth and milk. Simmer until the gravy is thick and bubbly, about 2 minutes. Season to taste with salt and pepper. Serve the steaks with the gravy over the top.