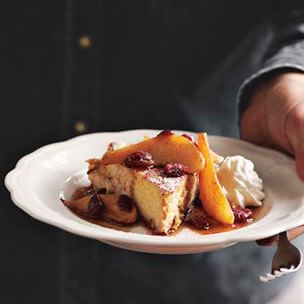 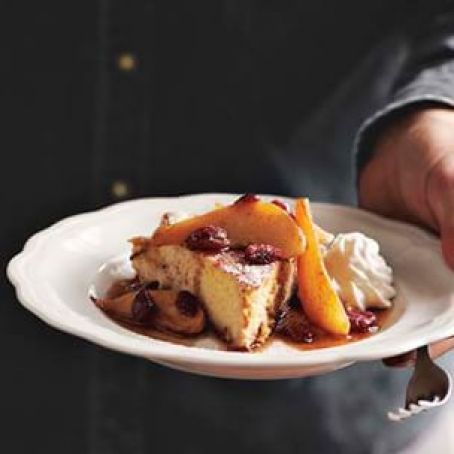 In a small saucepan over high heat, bring ¼ cup water to a boil. Add the cranberries and remove from heat. Let stand for at least 10 minutes.

Meanwhile, in the deep half of a frittata pan over medium heat, melt 1 tablespoon of the butter. When the foam subsides, add half of the pear slices, arranging them in a single layer. Cook, without moving them, until golden browwn, 3-5 minutes. Carefully turn the slices over and cook until golden brown on the other side, about 2 minutes more. Transfer to a bowl. Melt a half tablespoon of butter in the pan and repeat to cook the remaining pear slices.

Return all the pears to the pan along with the cranberries and any remaining soaking liquid. Add the vanilla and the remaining butter, and sprinkle with the brown sugar and cinnamon. Gently swirl the pan and stir the fruit to combine, about 1 minutes. Transfer the compote to a bowl and cover with aluminum foil. Rinse anddry the pan.

Cut each brioche slice into 3 triangles (1 large central triangle flanked by 2 smaller ones). In a bowl, whisk together the eggs, milk, vanilla, sugar, cinnamon and salt.

In the deep half of the frittata pan over medium heat, melt the tablespoon butter. In the shallow half of the pan over low heat, melt the teaspoon butter. Swirl the pans to distribute the butter evenly. Arrange the brioche triangles in a single layer in the deep pan to cover the entire surface; face the narrower points toward the center of the pan, like slices of pizza (may be on triangle left over). Cook until the bread is lightly golden underneath, 4-6 minutes.

Starting at the center, slowly pour the egg mixture over the bread, spiraling outward just to the edge, so all the bread is covered. Cook for 2 minutes more. Place the shallow pan upside down on top of the deep pan and flip the French toast into the shallow pan. Cook until golden brown underneath, 3-5 minutes.

Gently slide the toast onto a cutting board and let rest for 2 minutes. Cut into wedges and dust with confectioners’ sugar. Top with the pear-cranberry compote and whipped cream and serve. 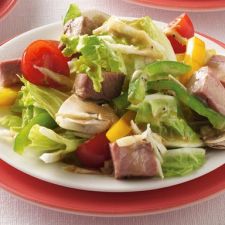