Method - Mix together the bread flour, all-purpose flour, and salt in a mixing bowl using the dough hook on a mixer.

Then slowly add the egg yolks, oil, and warm water on medium speed until the dough pulls away from the side of the bowl, but slightly sticks to the bottom of the bowl. Remove from the mixing bowl, cover the dough with oil and place in a sealed container. Place the covered dough in the refrigerator overnight.

Remove from the refrigerator and gently wipe off the excess oil from the dough.

Note : For the best results, place on a clean, lint free towel on the kitchen counter and gently pull the dough with your hands until it appears to be paper thin. The dough should cover the towel and be a rectangular shape.

Strudel Filling:
Preparation Method - Mix filling thoroughly. Once you have the dough stretched out place 3 tablespoons of the breadcrumbs on the long end of the dough closest to you approximately 3 inches wide. Mix together the sliced apples and the raisins and place on top of the breadcrumbs. Sprinkle the cinnamon sugar on top of the apple mixture. Add the remaining bread crumbs on top of the apple mixture. With a pastry brush, brush the melted butter on the dough that is exposed. Next grabbing the towel with side where the apple mixture is, roll the dough to the other end making sure that the apple mixture is even. Brush the outside of the dough with the melted butter. Then bake in a 400-degree oven for approximately 20-25 minutes or until the dough is golden brown. Let cool at room temperature for 30-40 minutes, then slice with a serrated knife into 4 equal portions.

Method - Combine the egg yolks and sugar in the bowl of a mixer. Beat with a wire whip attachment until thick and light. Scald the milk in a double boiler. Heat the heavy cream in a separate saucepan, then add the milk.

With the mixer running on slow speed, very gradually pour the scalded milk into the egg mixture.

Pour back into the double boiler. Heat it slowly, stirring constantly, until it thickens enough to coat the back of a spoon. Remove from the double boiler and set in a pan of cold water. Stir in the vanilla.

Stir the sauce occasionally as it cools in refrigerator. 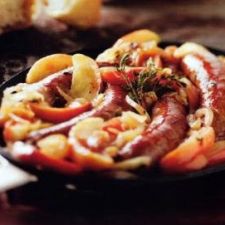