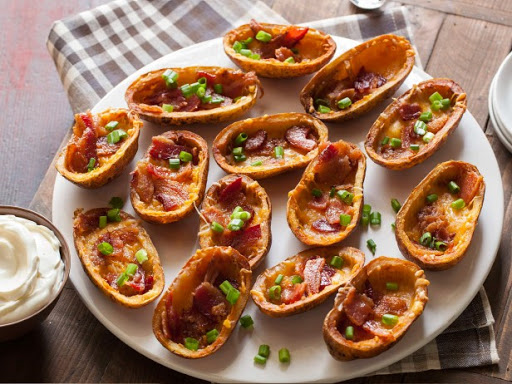 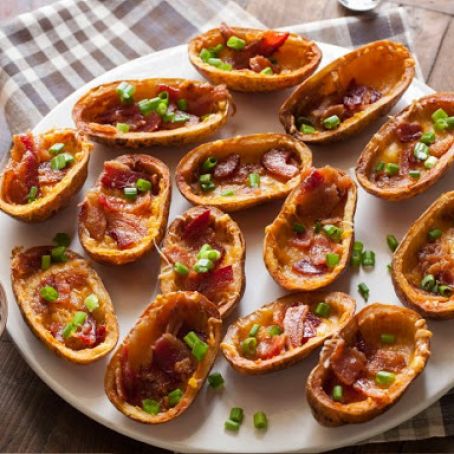 Preheat the oven to 400 degrees F. Brush the potatoes with vegetable oil and sprinkle with salt and pepper. Arrange on a baking sheet and bake until the potatoes are easily pierced with a fork and the skins begins to crisp, about 1 hour. Cool completely. Halve the potatoes and scoop out the flesh (reserve for another use), leaving a shell about 1/4-inch thick. (This can be done a day ahead.)

Meanwhile, heat the apple cider vinegar, white vinegar, butter, 1/2 teaspoon salt and a few grinds of black pepper in a small saucepan over medium heat. Bring to a simmer and cook until slightly thickened, about 10 minutes. Set aside.

Arrange the bacon in a large skillet with 3 tablespoons of the vinegar sauce and the brown sugar. Cook over medium heat until the fat is rendered and the bacon is slightly caramelized, about 5 minutes per side. Drain on paper towels (don't let the bacon cool completely on the towels or it will stick), then crumble and set aside.

Heat 3 inches of vegetable oil in a large saucepan or Dutch oven until the temperature reaches 375 degrees F. on a deep-fry thermometer. Add the potato skins in batches and fry until the skins are very crisp and deep golden brown, about 4 minutes per batch. Drain on paper towels, cut side down. Transfer to a rimmed baking sheet, cut side up. Brush the insides with some of the reserved vinegar sauce and sprinkle with salt.

Fill each potato half with some grated cheese and bacon. Bake until hot and the cheese melts, about 10 minutes. Brush with the remaining butter-vinegar sauce. Garnish with sliced scallion. Serve with sour cream and extra apple cider vinegar for drizzling. 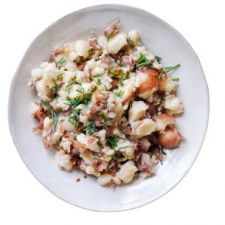