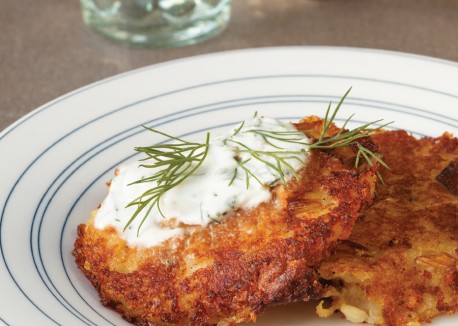 Delicious Vegan Leek and Potato Latkes are fried until golden brown and served with a dill yogurt dipping sauce, that makes the most delicious way to start any holiday meal or dinner party. Whip up a batch at your next gathering and watch as all of your guests devour these savory morsels. 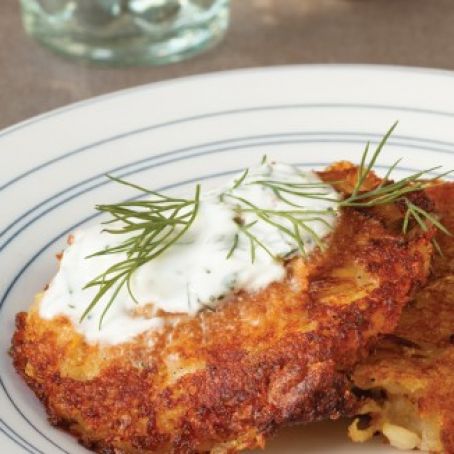 DILL YOGURT:
Stir together yogurt and dill in small bowl; season with salt and pepper, if desired. Chill 1 hour.

LATKES:
Place unpeeled potatoes in large saucepan, and cover with 1-inch water. Add salt, and bring to a boil. Cover, reduce heat to medium-low, and simmer 30 minutes, or until potatoes are very tender when pierced with fork. Drain potatoes, and rinse under cold water. Let stand until cool enough to handle.

Heat 1 tablespoon oil in large nonstick skillet over medium heat. Add leek, and season with salt and pepper, if desired. Sauté 5 minutes, then cover, reduce heat to medium-low, and cook 5 to 7 minutes more, or until leek is soft but not brown, and liquid has evaporated.

Peel potatoes, and mash with  potato masher in large bowl. Stir in leek mixture and breadcrumbs, and season with salt and pepper, if desired. Shape 1/4 cup potato mixture into 2 1/2-inch patty, and place on plate. Repeat with remaining potato mixture until you have 18 patties.

Heat remaining 1/4 cup oil in large nonstick skillet over medium heat. Add 4 latkes to pan, and brown 3 minutes per side, turning carefully with 2 spatulas so oil doesn’t splatter. Add more oil to pan if it becomes dry. Garnish with Dill Yogurt and dill sprigs, if using.