Preheat the grill to medium-high heat.
Heat 4 tablespoons of butter with shallots, garlic, bacon, and salt in a large saute pan.
Saute until the shallots are translucent and the bacon is crispy, about 6 to 8 minutes.
Add the flour and mix together well to make a roux. Stirring frequently, cook the roux until it smells nutty, about 4 to 5 minutes.
Away from the burner deglaze the roux with the anise liquor, place the pan back on the burner being careful, as the anise liquor will flame up.
Add the heavy cream and stir to incorporate.
Bring the mixture to a boil then reduce to a simmer, about 5 to 7 minutes.
Stir in the baby spinach, black pepper, red pepper flakes, and nutmeg, and bring back to a boil.
Once at a boil, immediately reduce to a simmer, about 4 to 6 minutes.
Cook until the spinach has release its liquid, and spinach has softened.
Over medium heat cook the mixture down to a fondue like thickness, about 6 to 8 minutes.
Remove from the heat and reserve to the side.

Melt the remaining 4 tablespoons of butter in a small saute pan.
Once melted remove from the heat and incorporate the seasoned bread crumbs, reserve to the side. 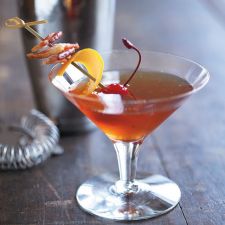